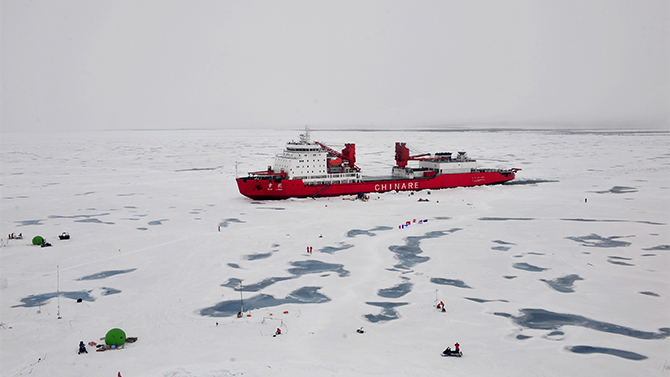 Over the last decade, the Chinese National Arctic Research Expedition (CHINARE) and U.S. collaborators have studied the environmental and climate changes of the western Arctic Ocean and has witnessed rapid expansion of the “acidified” water in the upper water column. This photo shows the science team working on an ice station in front of the icebreaker XueLong during the summer 2010 cruise in the northern Canada Basin, very close to the North Pole. 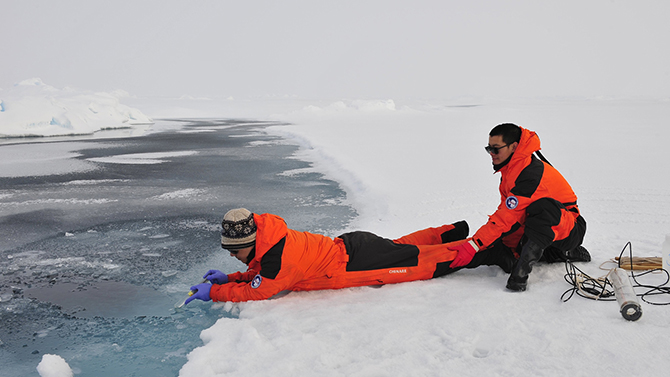 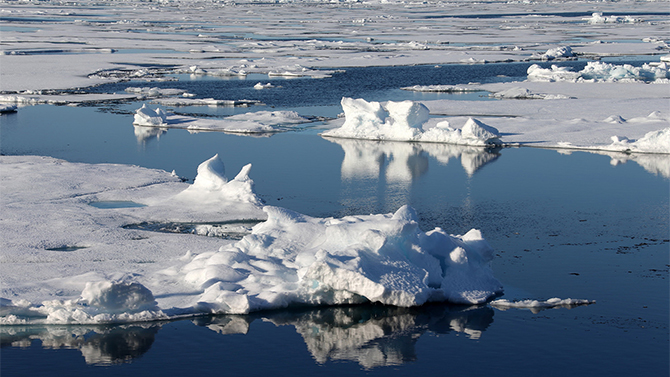 Rapid and large-scale increase in acidification has been found in the Arctic Ocean. 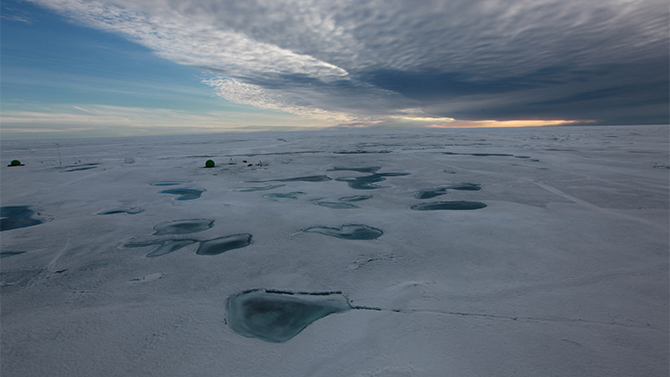 Arctic Ocean acidification is increasing at least twice as fast as that observed in the Pacific and Atlantic oceans. 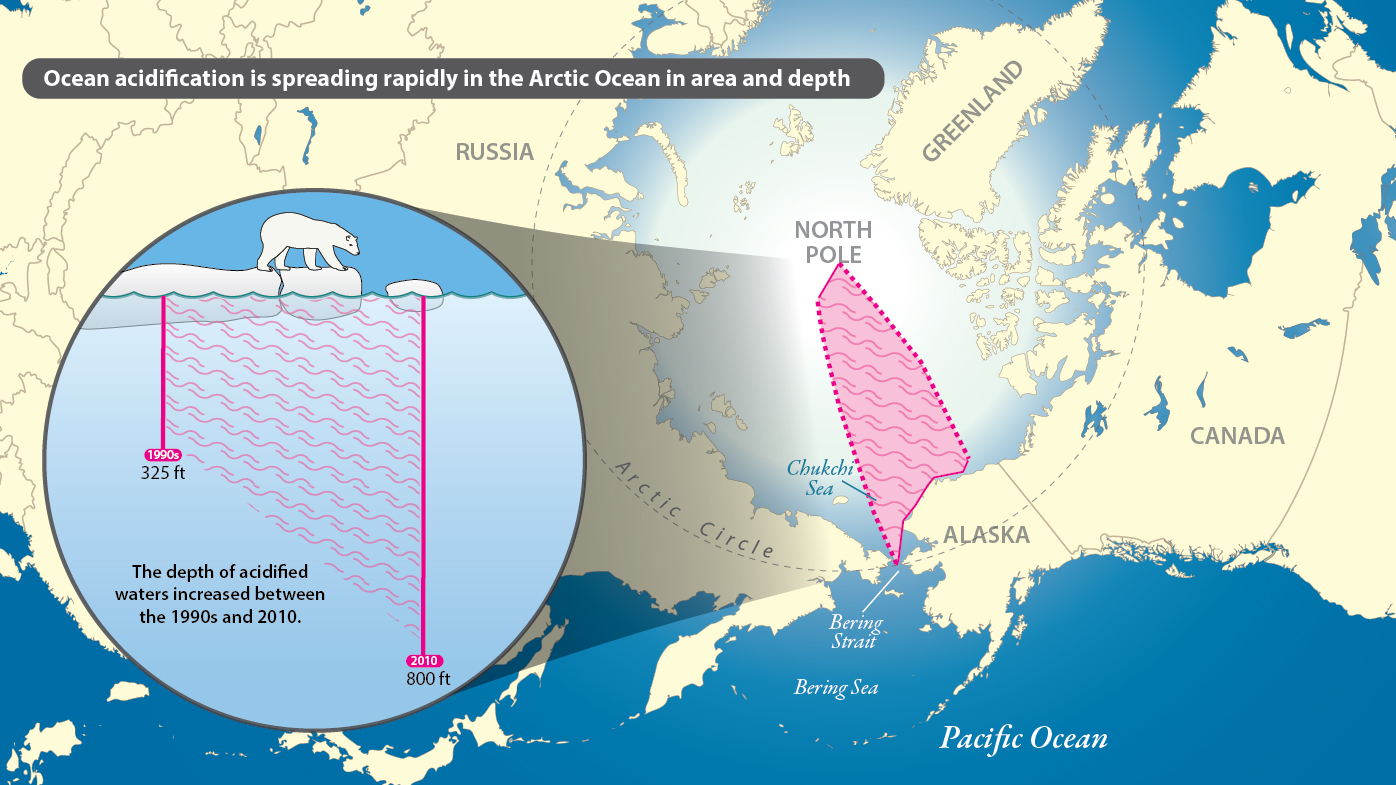 This map shows where ocean acidification is spreading in the Arctic Ocean, both in area and in depth.

Ocean acidification (OA) is spreading rapidly in the western Arctic Ocean in both area and depth, according to new interdisciplinary research reported in Nature Climate Change by a team of international collaborators, including University of Delaware professor Wei-Jun Cai.

The research shows that, between the 1990s and 2010, acidified waters expanded northward approximately 300 nautical miles from the Chukchi slope off the coast of northwestern Alaska to just below the North Pole. Also, the depth of acidified waters was found to have increased, from approximately 325 feet to over 800 feet (or from 100 to 250 meters).

“The Arctic Ocean is the first ocean where we see such a rapid and large-scale increase in acidification, at least twice as fast as that observed in the Pacific or Atlantic oceans,” said Cai, the U.S. lead principal investigator on the project and Mary A.S. Lighthipe Professor of Earth, Ocean, and Environment at UD.

“The rapid spread of ocean acidification in the western Arctic has implications for marine life, particularly clams, mussels and tiny sea snails that may have difficulty building or maintaining their shells in increasingly acidified waters,” said Richard Feely, NOAA senior scientist and a co-author of the research. Sea snails called pteropods are part of the Arctic food web and important to the diet of salmon and herring. Their decline could affect the larger marine ecosystem.

Among the Arctic species potentially at risk from ocean acidification are subsistence fisheries of shrimp and varieties of salmon and crab.

Other collaborators on the international project include Liqi Chen, the Chinese lead principal investigator and scientist with the Third Institute of Oceanography of State Oceanic Administration of China; and scientists at Xiamen University, China and the University of Gothenburg, Sweden, among other institutions.

The researchers studied water samples taken during cruises by Chinese ice breaker XueLong (meaning “snow dragon”) in summer 2008 and 2010 from the upper ocean of the Arctic’s marginal seas to the basins as far north as 88 degrees latitude, just below the North Pole, as well as data from three other cruises.

Scientists measured dissolved inorganic carbon and alkalinity which allows them to calculate pH and the saturation state for aragonite, a carbonate mineral that marine organisms need to build their shells.

Data collected by ship and model simulations suggest that increased Pacific Winter Water (PWW), driven by circulation patterns and retreating sea ice in the summer season, is primarily responsible for this OA expansion, according to Di Qi, the paper’s lead author and a doctoral student of Chen.

“This work will help increase our understanding of climate change, carbon cycling, and ocean acidification in the Arctic, particularly as it affects marine and fishery science and technology,” said Chen.

PWW comes from the Pacific Ocean through the Bering Strait and shelf of the Chukchi Sea and into the Arctic basin. In recent years, melting sea ice has allowed more of the Pacific water to flow through the Bering Strait into the Arctic Ocean. Pacific Ocean water is already high in carbon dioxide and has higher acidity. As the ocean mass moves north, it absorbs additional carbon dioxide from decomposing organic matter in the water and sediments, increasing acidity.

The melting and retreating of Arctic sea ice in the summer months also has allowed PWW to move further north than in the past when currents pushed it westward toward the Canadian archipelago.

Arctic ocean ice melt in the summer, once found only in shallow waters of depths less than 650 feet or 200 meters, now spreads further into the Arctic Ocean.

“It’s like a melting pond floating on the Arctic Ocean. It’s a thin water mass that exchanges carbon dioxide rapidly with the atmosphere above, causing carbon dioxide and acidity to increase in the meltwater on top of the seawater,” said Cai. “When the ice forms in winter, acidified waters below the ice become dense and sink down into the water column, spreading into deeper waters.”