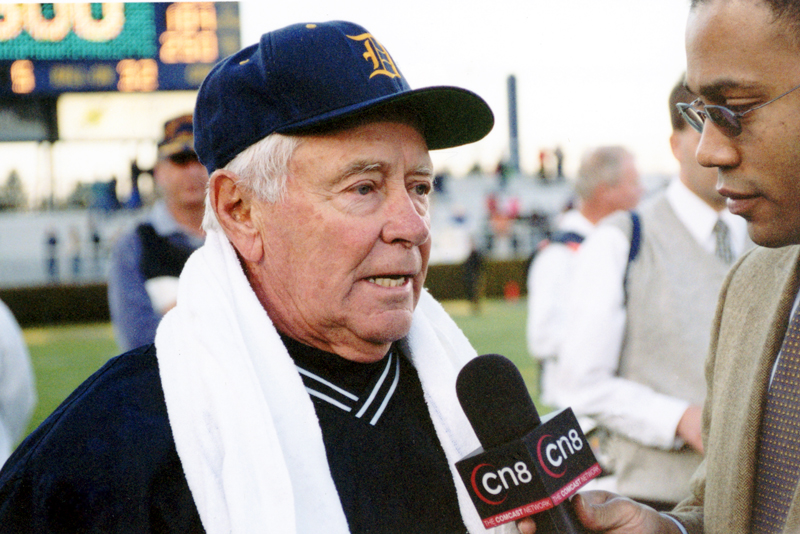 Tubby Raymond speaks to a TV interviewer after his 300th victory. 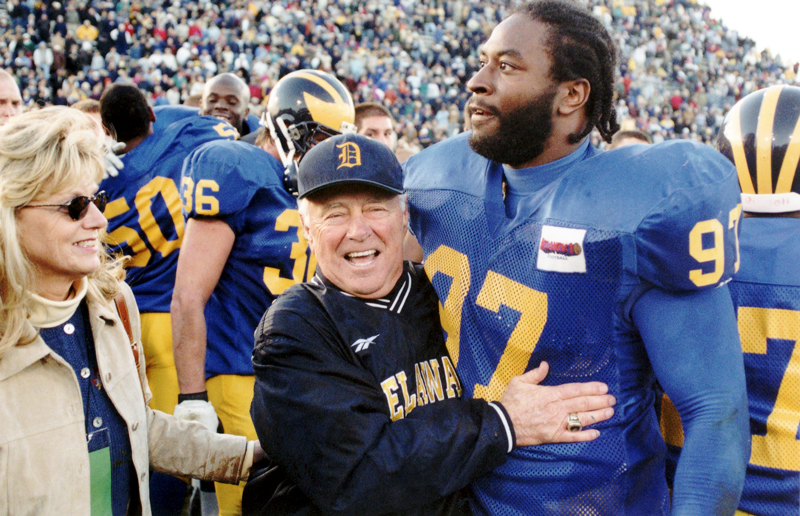 Tubby Raymond after a victory. 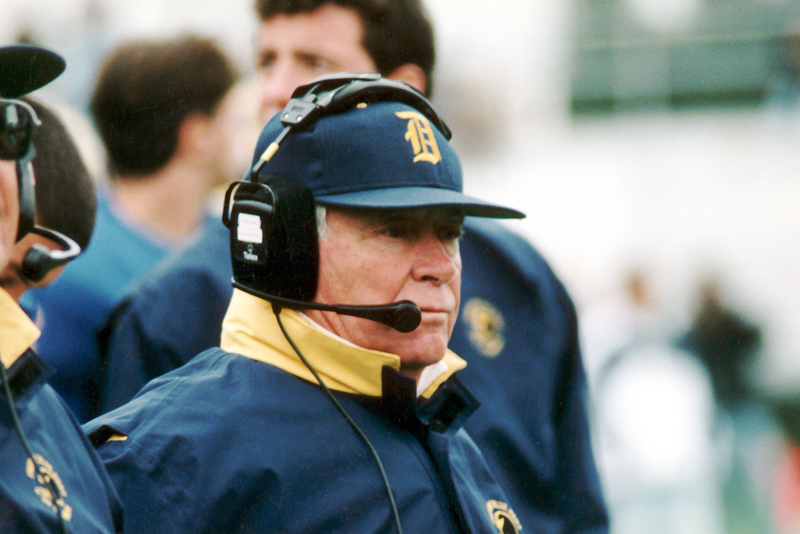 Tubby Raymond on the sidelines. 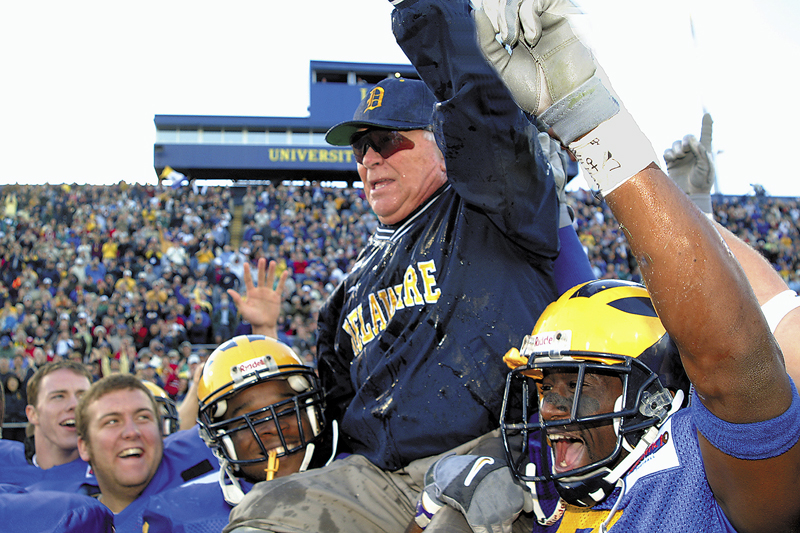 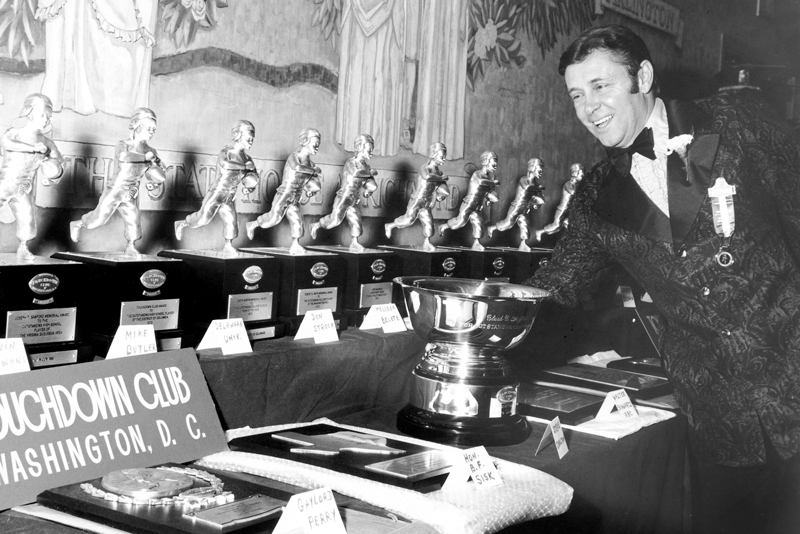 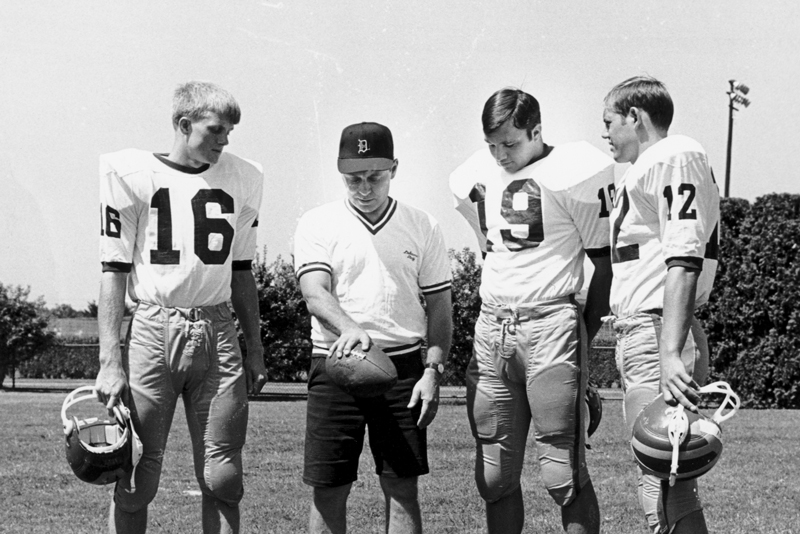 Tubby Raymond talking to players in the 1960s.

Harold R. “Tubby” Raymond, one of the most successful coaches in the history of college football during a nearly 50-year career at the University of Delaware, and an icon throughout the state of Delaware and beyond, passed away Friday, Dec. 8, after a brief illness.

Coach Raymond, who won 300 games and three national championships at UD and was one of the innovators of the famous Wing-T offense, had celebrated his 92nd birthday on Nov. 14.

“On behalf of the entire University of Delaware community, we offer our deepest condolences to the family and friends of Harold R. ‘Tubby’ Raymond, whose legend and legacy have touched generations of Blue Hens,” said UD President Dennis Assanis. “Tubby was a great leader, a wise mentor and a generous contributor to his community. Possibly more than any other coach, Tubby helped shape UD Athletics into the excellent program it is today, one that reflects his dedication to teamwork, focus and achievement both on and off the field. We celebrate his lifetime of accomplishment and his abiding commitment to the University. He was a true Blue Hen, and he will be missed.”

“We pass along our deepest sympathies to the Raymond family and everyone who loves Delaware Football,” said UD Director of Athletics and Recreation Services Chrissi Rawak, who was a fellow University of Michigan graduate. “Coach Raymond was a true icon and his legacy lives on among all Blue Hens. We certainly remember all the great accomplishments that Coach Raymond provided Delaware fans over the years, but more importantly we celebrate the impact he had on the lives of so many student-athletes.”

From Michigan to Delaware

A native of Flint, Michigan, Coach Raymond played football and baseball at the University of Michigan, began his coaching career right out of college, and came to Delaware in 1954 as head baseball coach and assistant football coach under the legendary David Nelson.

After serving as an assistant coach for 12 years under fellow College Football Hall of Famer Coach Nelson, Coach Raymond took over the reigns of the Blue Hens in 1966 and went on to record one of the greatest coaching careers in college football history.

He enjoyed a stellar 36-year career that saw him lead the Blue Hens to an impressive record of 300-119-3, three national titles, 16 NCAA playoff appearances, 14 Lambert Cup trophies, nine ECAC Team of the Year awards, and nine conference titles. An incredible 31 of his 36 teams had winning records and 11 won 10 or more games.

Coach Raymond earned his 300th victory with a win over Richmond Nov. 10, 2001, making him just the ninth coach in college history to reach that milestone and only the fourth to accomplish the feat at one school at the time.

The team success brought Coach Raymond numerous honors, including the distinction of being just one of two college division coaches to win consecutive American Football Coaches Association Coach of the Year awards. Coach Raymond was cited in 1971 and 1972, when he coached Delaware to back-to-back national titles.

Coach Raymond came to Delaware from the University of Maine in 1954 and served as Coach Nelson's backfield coach for 12 years before Nelson, who died in 1991, resigned to devote full-time to his athletic director duties.

Called "Tubby" by his childhood playmates, Coach Raymond lost the weight but not the nickname. A native of Flint, Michigan, and a 1950 graduate of the University of Michigan, he played football and baseball for the Wolverines and captained the 1949 baseball team.

He played minor league professional baseball for two years and was head football coach at University High School in Ann Arbor, Mich., before heading to the University of Maine.

He served as Blue Hen baseball coach for nine years and compiled the second best coaching record in the history of the sport at UD with a mark of 141-56. Six of Coach Raymond's nine baseball teams qualified for the NCAA District II playoffs.

Coach Raymond's main outside interests included golf and painting. His acrylic paintings of Blue Hen players brought him national media attention, including features in Sports Illustrated and on ABC's Good Morning America, NBC’s Nightly News, CNN and Fox Sports.  Beginning in the 1950s, he painted a portrait of a senior member of the team each week during the season for most of his career at Delaware and continued the tradition in 2002 after his retirement until this season.

In addition to his football duties at Delaware, Coach Raymond was a past president of the American Football Coaches Association and at the time of his death served as chairman of the AFCA Rules Committee.

Raymond resided in Landenberg, Pennsylvania, with his wife, Diane, and had four children, 11 grandchildren, and 13 great grandchildren. His first wife, Susan, passed away in 1990. His youngest son, Dave, earned worldwide fame as the original Phillie Phanatic costume, one of the most recognizable mascots in professional sports.

Funeral arrangements are pending. In lieu of flowers, the family asks that contributions be made to the Tubby Raymond Foundation, which is part of the Delaware Community Foundation.