Olympic competitors aren't born. They're crafted through years of careful practice, agonies of defeat and the ability to persevere - and improve - under great pressure and difficulty.

That's why more than 60 young figure skaters - including many of the United States' top competitors - have made their way to the University of Delaware's ice rinks over the past decade. Prompted by the U.S. Figure Skating Association and their coaches, they hope to find a competitive edge in the unique biomechanical analysis done by Jim Richards, distinguished professor of kinesiology and applied physiology in the College of Health Sciences.

Richards and his research team have rigged up an array of 10 cameras that capture data from reflective markers placed on skaters. As they attempt challenging jumps - especially the triple Axels and quadruple jumps that put elite skaters at the top of their sport - the cameras capture their precise positions, the speed of their rotations, their time in the air. 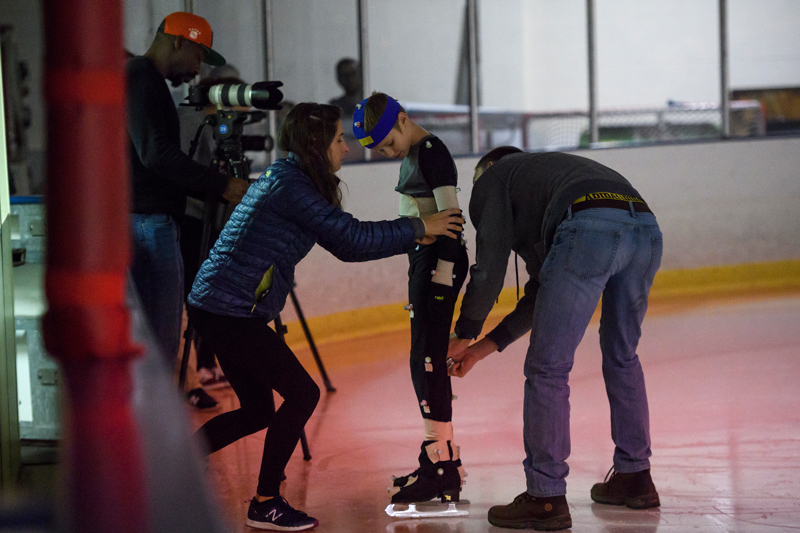 Researchers aren't looking at fancy footwork sequences or scratch spins or any of the other elements of competitive skating.

"They have to get into their tightest position within a specific time period," Richards said. "For a triple or quad, that's within the first revolution."

If an arm is sticking out a bit or their head is leaning, it will cost them rotation speed. And the cameras don't lie. Debbie Minahan, who coaches skater Will Annis at the Yarmouth (Mass.) Ice Club, said she often uses video to analyze skaters' techniques but was excited to have access to this level of analysis.

"I thought this was an incredible opportunity that wouldn’t be offered anywhere else," she said. "For Will - working on all of his triples now - it seemed that it would be valuable to have that feedback to get a more consistent repetition out of the jumps. Some of them are more stabilized than others. The hope is that the information that we receive helps stabilize all of them and then he'll be able to move into triple-triples."

Will, who won the 2017 U.S. juvenile boys' championship last January and was second in the intermediate men's competition at the Eastern Sectional Championships in November, said he has a tendency to go too far to the left side on some jumps.

"This will help my air position, so it should help solve that problem," he said.

He was one of several young national-level competitors who visited Newark this fall to have their jumps analyzed in a visual 3-D computer program Richards developed with biomechanics expert Tom Kepple, chief science officer at C-Motion Inc. and a former instructor at UD. Competitive skater Alysa Lin prepares for a jump during biomechanics testing at the University of Delaware.

For the test, small markers covered with retro-reflective tape are attached to the skater.

An array of 10 cameras are mounted to the ceiling of the rink, over the testing area, and those cameras capture light as it is reflected from the skater during their test.

Richards and his research team use the data to produce a pair of three-dimensional computer models - avatars - one showing the skater's actual jump, the other a mathematics-based model that shows what the jump would be like if the skater made specific modifications.

They can see, for example, that if the skater tucks that right elbow in a bit more or doesn't lean quite so much, enough velocity could be gained to complete that triple or quadruple jump. The cameras and retro-reflective markers work together to gather data points on each skater's jumps.

Plenty of skaters have the potential to accomplish this, Richards said, and his model suggests physiologically realistic changes in every joint to show a skater how it can be done.

"There are two parts to jumping successfully," Richards said. "You have to leave the ice with enough energy to rotate at the speed you need to get the number of rotations you want. It's angular momentum. And almost every skater we test has enough of that for most or all of their jumps."

The speed and momentum required varies, of course, depending on whether the skater is doing a double jump, a triple or a quadruple.

Sometimes a skater is missing a jump by a half turn, by a quarter turn, sometimes less. A change in arm position may be all that's necessary to land the jump correctly.

But the adjustments aren't easy for skaters, Richards said. Most tend to conserve their momentum, often without even knowing it, he said. They get comfortable doing a jump at a certain speed and get nervous if they need to ramp it up.

"It feels to some that if they spin faster than 'this,' they will be out of control," he said. "They don't know how to land it."

The biomechanical science - as shown in the model - is quite persuasive, though, Richards said.

"Usually coaches know what they're looking for - but they're sending skaters here because they want them to see it for themselves," he said. 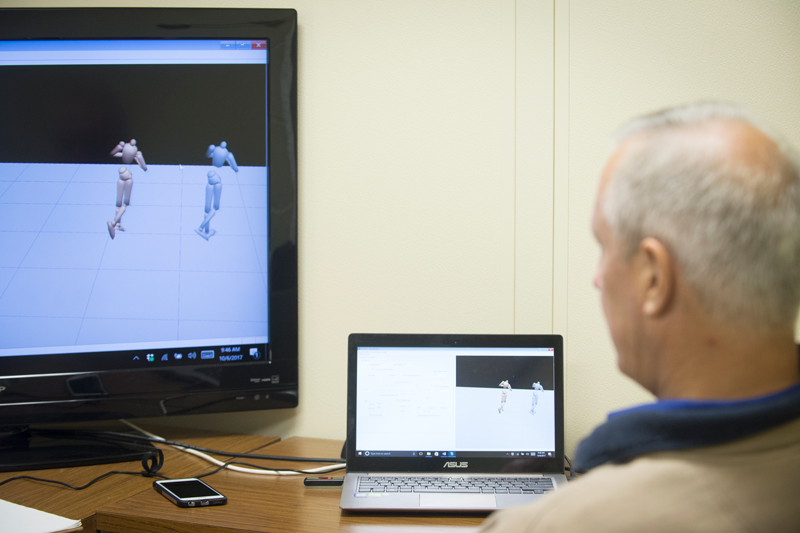 The computer program takes the data points and translates them into a three-dimensional model of the skater's actual motions. That model is then compared to another model that shows how specific changes in position would affect a skater's performance.

Once the skaters understand the principles, they work to adjust to a new, higher-level normal.

"They have to get used to hitting that new spin rate," Richards said. "So you start with a safe jump and kids get it pretty well. If they're diligent, it takes them from two or three weeks to a couple months to get it."

Laura Lipetsky, a former national competitor who is now a coach in Oakland, Calif., visited with one of her skaters - junior competitor Alysa Liu, 12. Alysa won the short program at the novice level of last year's national championships and finished fourth overall. In November, she won the Pacific Coast Sectional junior ladies' title.

She now hopes to master the triple Axel and quadruple Salchow jumps.

"Some of the Russian skaters are doing triple Axels and quads at the junior level," Lipetsky said. "Her goal is to get to the Olympics. She loves the challenges and that's why we keep pushing her - it's what she wants."

Skaters work hard to accomplish difficult jumps and jump combinations. Quadruple jumps were unheard of until Canada's Kurt Browning landed the first in competition in 1988. But Richards doubts that anyone will be adding a quintuple jump to their program.

"If they do, they'll probably have a very unique (and unusual) physique," he said.

Richards sits down with every skater and coach to show them preliminary results of the tests and explain what he sees in the models. They also get written reports and video files.

He saw good timing and good jump height in Alysa's jumps and a few places where a change in arm position would be helpful.

He saw similar strengths in 12-year-old Ilia Malinin, who has two national championships to his credit (winning the juvenile level in 2016 and the intermediate in 2017) and was tested the same day. Richards showed Ilia and his father/coach, Roman Skornyakov, how a few adjustments would have Ilia achieving the spin rates he needs for triple Axels and quads.

"I liked this," Ilia said. "And I think I should improve. I like the challenge a lot and this helps me get ready for other jumps."

Jim Richards has been on the University's faculty since 1980 and serves as distinguished professor of kinesiology and applied physiology in the College of Health Sciences. His research interests include device design, measurement technique optimization, gait analysis and sport biomechanics. His work with elite skaters is a focus of attention whenever international and Olympic competitions approach, but an especially significant part of his work has been with clinicians who treat children with brachial plexus birth palsy (BPBP).