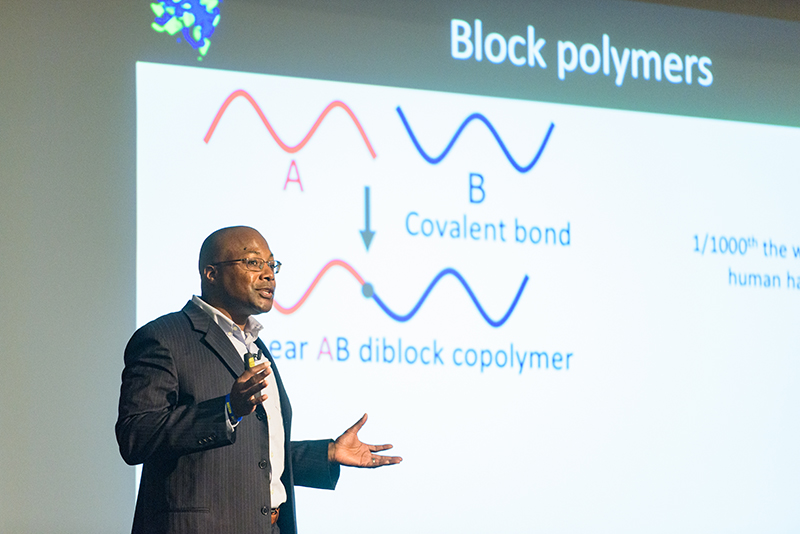 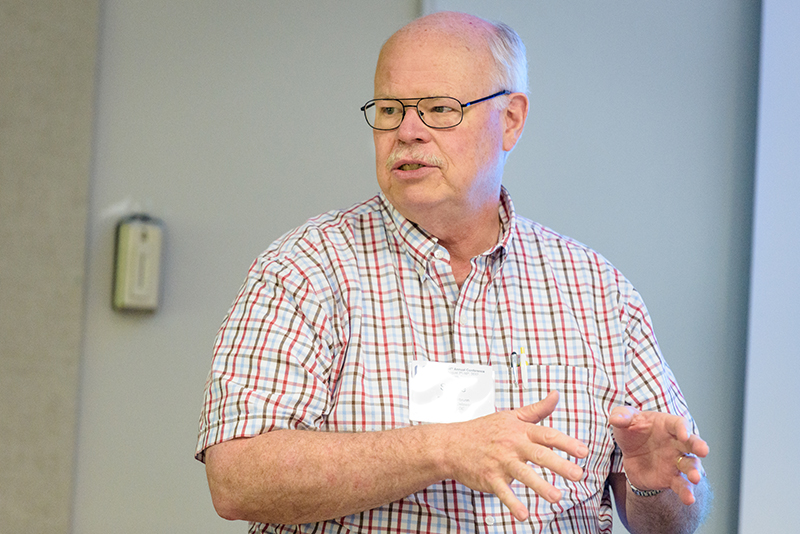 Steve Sauerbrunn, conference chair, a thermal analysis engineer at the Center for Composite Materials, speaks about the late Richard Wool, a professor of chemical and biomolecular engineering at UD. 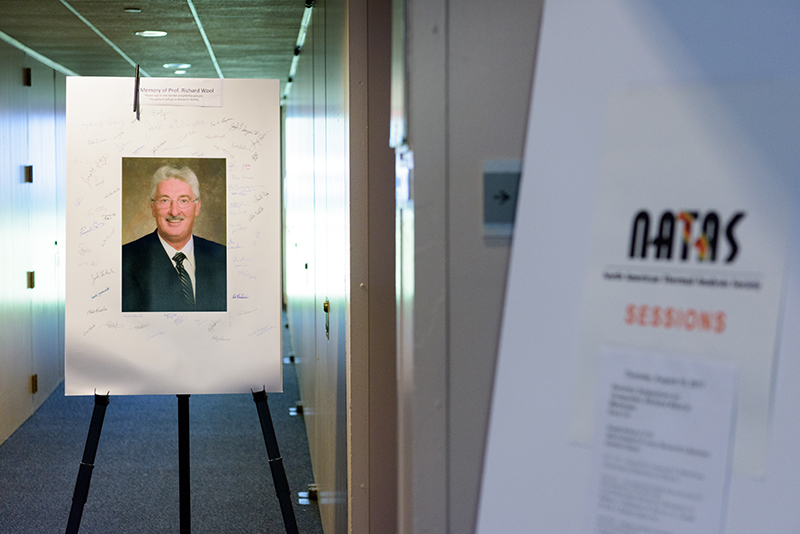 Conference attendees had an opportunity to sign this photo of Dr. Wool, which will be given to his family.

NATAS promotes the science and practice of thermal analysis, the study of materials as they change temperature.

At the conference held in Clayton Hall, a group of 174 researchers participated in dozens of sessions on topics such as thermal hazards, rheology and viscoelasticity and energetic materials.

On Tuesday, Wednesday and Thursday, the programs began with a plenary lecture. Tuesday’s lecture was given by UD’s Thomas H. Epps, III, Thomas and Kipp Gutshall Professor of Chemical Engineering, who spoke about functional nanoscale polymers.

This conference gave NATAS members a chance to learn at formal sessions and exchange ideas with their peers, which can be rare opportunity, says Steve Sauerbrunn, conference chair, a thermal analysis engineer at the Center for Composite Materials at UD.

“Often when you’re in thermal analysis, you may only have one or two people in your field and at your skill level at your company,” he says.

The conference included a symposium honoring the late Richard Wool, who was a member of the UD faculty from 1994 until his death in 2015. Dr. Wool was a professor of chemical and biomolecular engineering and director of the Affordable Composites from Renewable Sources (ACRES) laboratory.

In 2013, he won the Presidential Green Chemistry Challenge Award for his work with bio-based materials. The following year, he won the World Green Design Award for his invention of eco-leather, a leather substitute made with materials such as flax and cotton combined with plant oils.

Session organizer Joseph Deitzel, a senior scientist at the Center for Composite Materials, worked with Dr. Wool for about a decade. He spoke about Dr. Wool’s contributions to the fields of polymers and bio-material composites, as well as his kind nature and love of music, sailing and tennis.

“It’s really hard to talk about him without smiling,” Deitzel said.

In presentations that followed, researchers talked about their work — and how it builds on Dr. Wool’s pioneering research.

For example, John Joseph La Scala, who studied with Dr. Wool and is now at the Army Research Lab, said the Department of Defense is interested in making lightweight, low-maintenance bio-based polymers, which could have military applications while having lower toxicity, cost and environmental impact than currently used materials. Dr. Wool’s research in the area of soybean-based composites laid the groundwork for this field. Dr. Wool's work in polymer diffusion is critical to solving major materials processing challenges that will be critical to the development of structural 3-D printed polymers and composites.