A champion of the humanities

The nation's chief advocate for the humanities visited the University of Delaware last week as part of his 50-state tour to mark the 50th anniversary of the National Endowment of the Humanities.

And as any good lifelong learner would, William (Bro) Adams, chairman of the NEH since 2014, brought far more questions than answers.

• "Where does lacquer come from?" he asked during a discussion of Chinese lacquers in Winterthur's Scientific Research and Analysis Laboratory. Catherine Matsen, associate scientist at Winterthur and UD assistant professor of art conservation, had the answer: Tree sap.

• "What should we do? What do we want to do? What serves the common good of the globe?" he asked the audience in UD's Roselle Center for the Arts, where he delivered a public speech as part of the University's "Thought Leader" series.

He brought a call-to-action for his listeners, too, as the former Stanford University professor and president of Bucknell University and Colby College made a fervent plea for more public – and more powerful – discussions of the importance of the humanities and the critical thinking skills they engender.

Despite contributions to the foundations of democracy, extensive support of museums and libraries, the clear public longing to understand history – as evidenced by the 32 million viewers of documentary filmmaker Ken Burns' recent project on the Roosevelts – and the many benefits harvested by academic research, the humanities "are at serious risk of attack, with uncertain prospects in the future," he said. 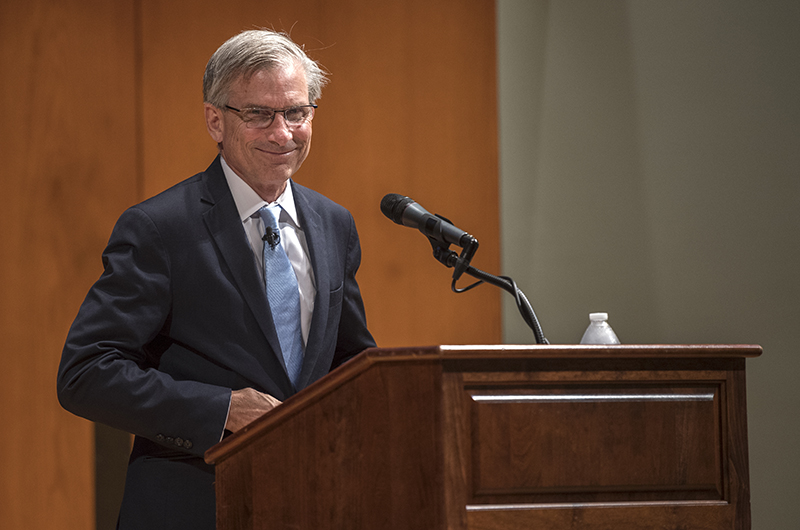 William (Bro) Adams discusses the impact of the NEH and the challenges it faces. 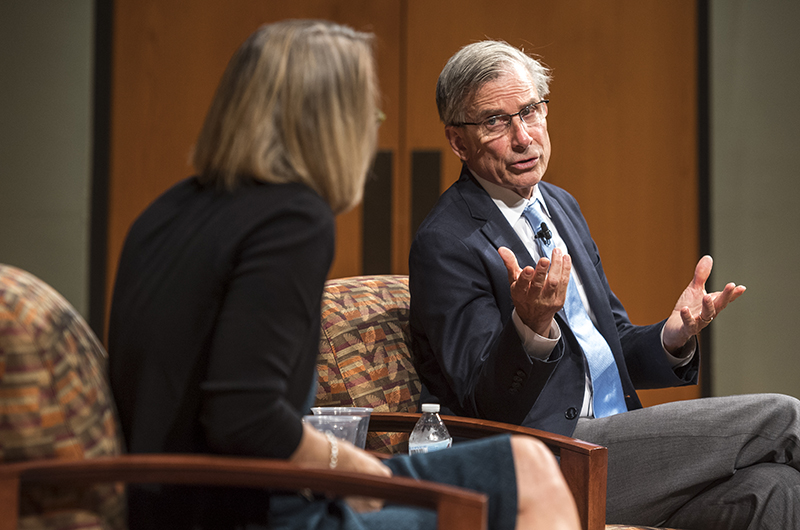 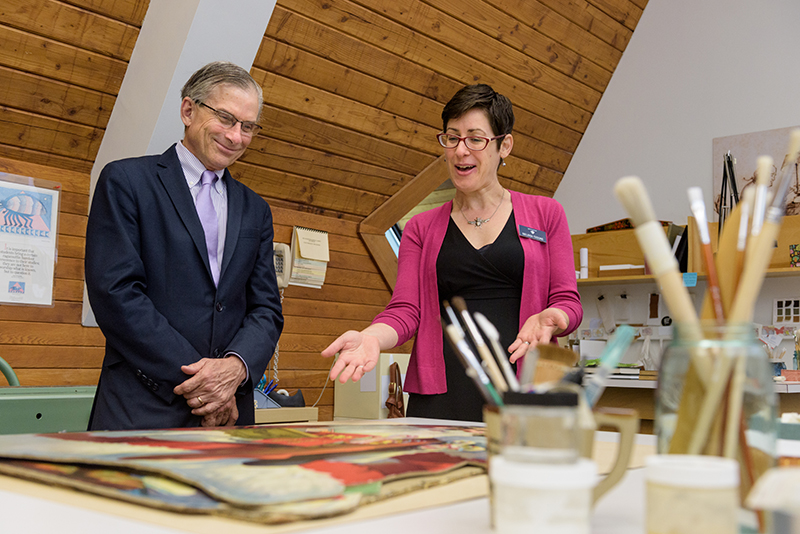 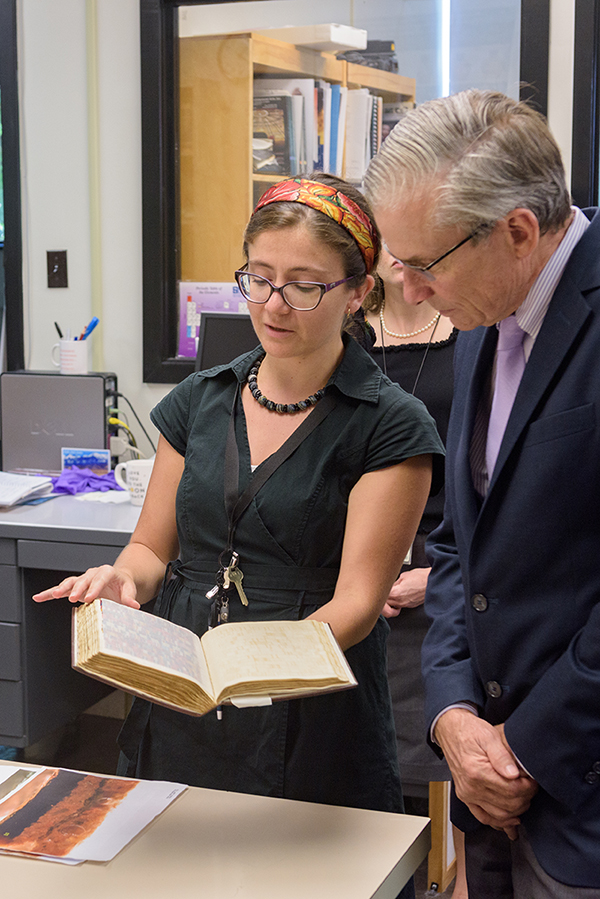 Jocelyn Alcantara-Garcia discusses her work on archival and cellulosic materials. 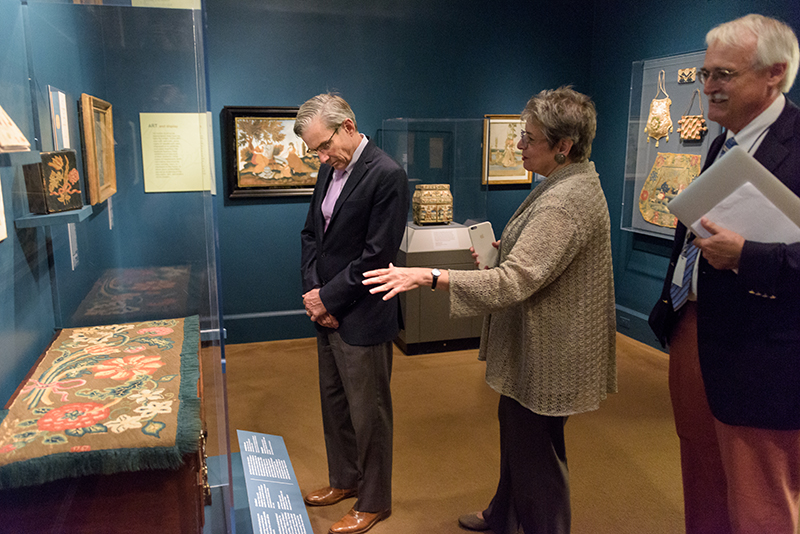 Bro Adams with Linda Eaton, director of collections and senior curator of textiles, and Ritchie Garrison, director of the American Material Culture program and professor of history. 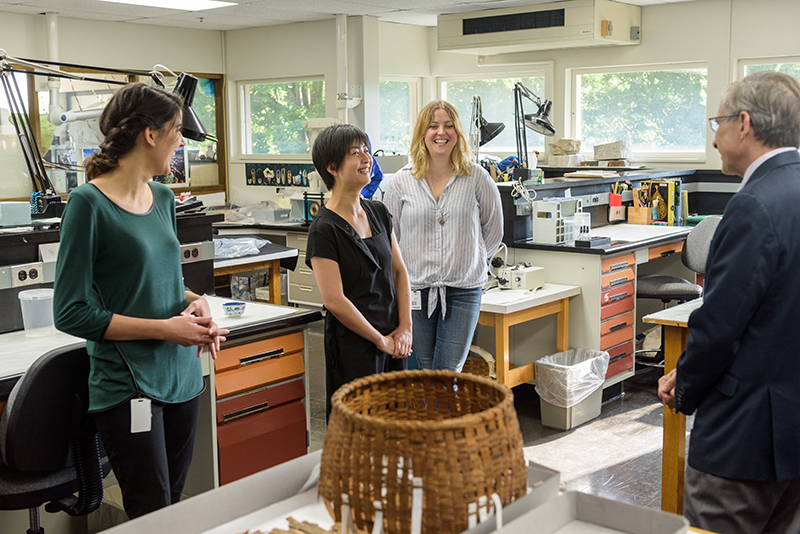 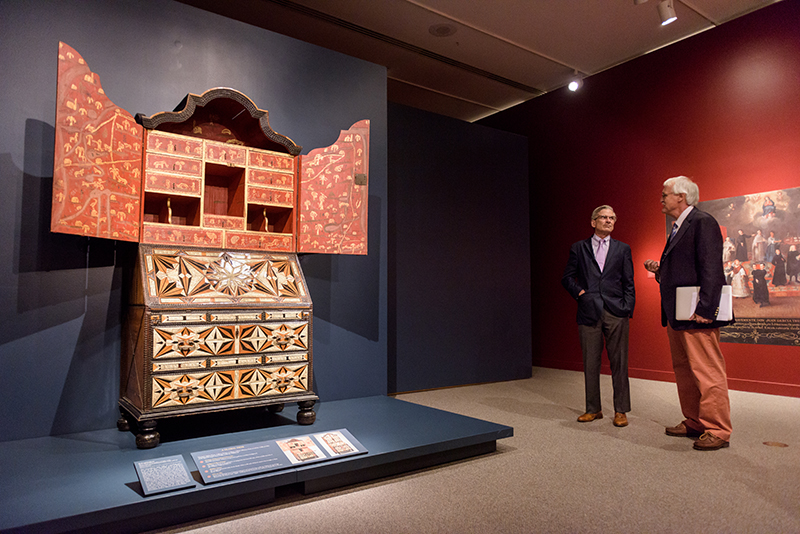 NEH Chairman Bro Adams discusses a dramatic desk and bookcase from Mexico, made in the mid-18th century. 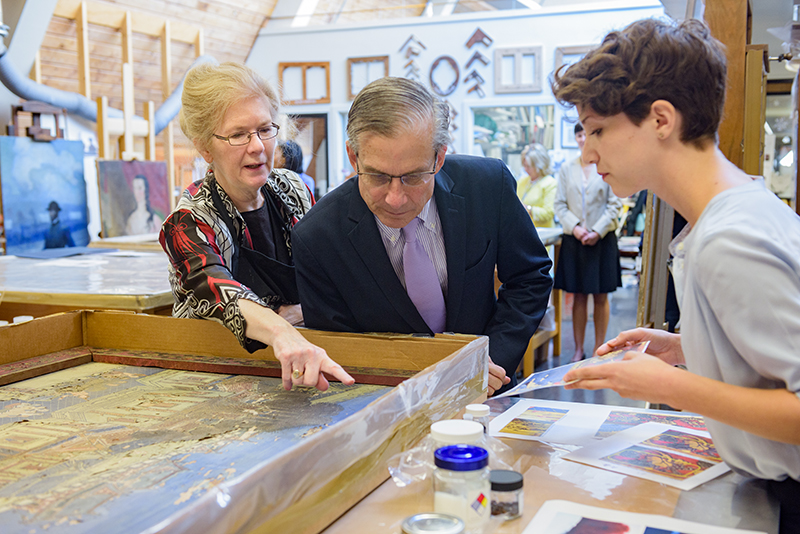 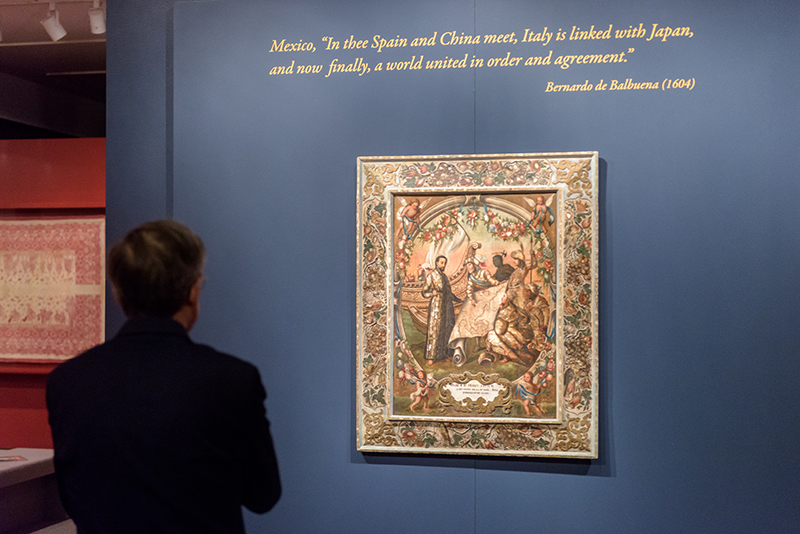 The quotation about this piece from Mexico suggests the enormous value of the humanities.

Indeed, the humanities – that realm of study that examines human culture and how humans interact and experience the world – has been under pressure for more than a decade, as budget makers and elected officials wrestle with numbers and competing priorities.

The U.S. Congress gives the NEH just half of the budget it had in 1995, for example – a total of $148 million in fiscal year 2016, including about $120 million in grant money for the education, research, preservation and public programs it supports.

Adams is working to amplify public recognition of the value of the work supported by the NEH in its half-century history – more than 63,000 grants, worth a total of about $5.3 billion, not counting the $2.7 billion in matching support those grants have leveraged.

The NEH supports study in a wide range of disciplines, including literature, philosophy, language, law, history, religion, archaeology, ethics, the history and theory of the arts. It supports work that studies and reflects the diverse heritage and traditions of humans, and work that demonstrates how the humanities are relevant today. All of that contributes to skill in critical thinking, effective communication, and understanding the context of events and change in the world.

"Our work is to demonstrate why liberal learning is the best preparation for life in our contemporary society," Adams said.

Look anywhere in our society, he said, and you see the need for thoughtful, informed dialogue – in politics, race relations, technology, scientific advance, the legacy of war and conflict, environmental issues, to name a few.

"It's time for humanists to very deliberately and more powerfully re-engage the public realm and speak in publicly accessible ways," he said.

Too often, Adams said, the humanities are discussed in contrast to the natural sciences and the STEM (science, technology, engineering and mathematics) fields, a dichotomy he argues against. The sciences need the humanities, he said, and vice versa.

"We need to move beyond our preoccupation with vocations and STEM ... and re-engage the idea of the whole person," Adams said.

There's plenty of science going on in art conservation, for example, as you can see in the research of UD's Richard Wolbers, associate professor, coordinator of science and affiliated paintings conservator. Wolbers is developing cleaning systems for complex fine art materials – most recently for the Delacroix Chapel in the Church of Saint Sulpice in Paris – and microscopically applied techniques.

And there is good cause for informing the scientific endeavor with the habits of mind formed in the study of humanities.

But there is "substantial pressure" on humanities programs in every educational setting in the country, he said.

"The irony of all this, even as this pressure builds, is that we as a country are besieged by challenges that require humanities understanding," he said.

As an example, he pointed to the extraordinary scientific breakthroughs in genetics technology, specifically the CRISPR-Cas9 technology that allows scientists to edit the entire human genome.

"It raises all kinds of questions," Adams said. "And we are in a very problematic period with regard to race and race relations. This is an issue for you and the entire country. If ever there was a question that needed the humanities it is race."

The NEH has had great impact since its creation by President Lyndon Johnson in 1965, with support for:

• 161 grants to the University of Delaware for a total of about $10 million.

Among those grants to UD are several new projects that Adams referenced, including:

• $30,000 to UD's Department of Art Conservation to support a visit to Cuba for exchange of methods and practices centered on the preservation of photographic materials, that will be led by Debra Hess Norris, chair and professor of the department, Unidel Henry Francis du Pont Chair of Fine Arts, director of the Winterthur/UD Program in Art Conservation and interim associate dean for the humanities.

• $75,000 for UD's Colored Conventions Project to transcribe the minutes of African-American conventions from the 1830s to the 1890s. The project is directed by Gabrielle Foreman, Ned B. Allen Professor of English and professor of history and black American studies.

• $121,907 to support the UD Library's work on the National Digital Newspaper Program, which aims to make thousands of early newspaper editions available in digital form.

• $350,000 in matching funds to support a "Next Generation PhD" implementation grant to recruit and train doctoral students in African American public humanities for a broad range of careers in the cultural heritage industry. Ann Ardis, senior vice provost for graduate and professional education and director of the College of Arts and Sciences’ Interdisciplinary Humanities Research Center, is a primary investigator for this pilot project, and Erica Armstrong Dunbar, Blue and Gold Professor of Black American Studies and History is the inaugural program director.

"Even in this stressful time, I am buoyed by the incredible richness I see in the humanities – particularly in places like the University of Delaware," Adams said.

During a question and answer period, Foreman spoke of the public hunger she has seen as the Colored Conventions Project develops. Volunteers are joining the effort to produce an extraordinary digital resource that will inform much historical inquiry. Her team has heard from Civil War re-enactors from New York and someone in England who discovered records there, she said. And Denise Burgher has been up early many days, helping elders and others in the community navigate the transcribing software.

"These are powerful intersections," Adams said. "There are tremendous, rich veins to mine and you can't do it without engaging the public. That is critical to our long-term understanding."

He agreed, too, with a suggestion made by Lynnette Overby, deputy director of UD’s new Institute for Community Engagement and professor of theatre, that changes to the tenure and promotion process are necessary to recognize the community engagement and service that are essential to that kind of work.

Adams spent three days in Delaware, meeting in Wilmington with representatives of the Delaware Humanities Forum and the Delaware Historical Society, speaking with students, faculty, alumni and senior administrators at Delaware State University in Dover, dining with UD President Dennis Assanis and First Lady Eleni Assanis and guests, and talking with students and faculty at the Winterthur conservation labs in objects, paper, furniture, textiles, paintings, and library materials.

His visit to Delaware State was significant to underscore the intrinsic value of the humanities, said Susan West, chair of the Delaware Humanities Council and associate professor of philosophy at DSU.

"A lot of students spoke up and alumni testified to the importance of the humanities in their own careers," West said.

He also attended the opening reception for the exhibition "First Folio! The Book that Gave Us Shakespeare." The original 1623 First Folio, containing 36 of Shakespeare's plays, is on display through Sept. 25 in the Old College Gallery, part of a national touring exhibition by the Folger Shakespeare Library.

Timed to commemorate the 400th anniversary of Shakespeare's death, the “First Folio” tour is supported in part by a major grant from the NEH.

Giving people the opportunity to see the First Folio and discuss the different meanings they find in the writing provides "a great example of how the humanities can live and breathe," Adams said.

“We are deeply honored to have had both Michael Witmore, director of the Folger Institute, and Chairman Adams on campus for this exhibition opening,” said Janis Tomlinson, the UD Library’s director of Special Collections and Museums.

“I am enormously grateful to our friends and colleagues at the Delaware Humanities Forum, the Delaware Historical Society, DSU and Winterthur, as well as all of my colleagues here, for helping to welcome Chairman Adams to Delaware,” said Ardis. “He is truly a 'Thought Leader' and an inspiring advocate for innovation in undergraduate as well as graduate education.”