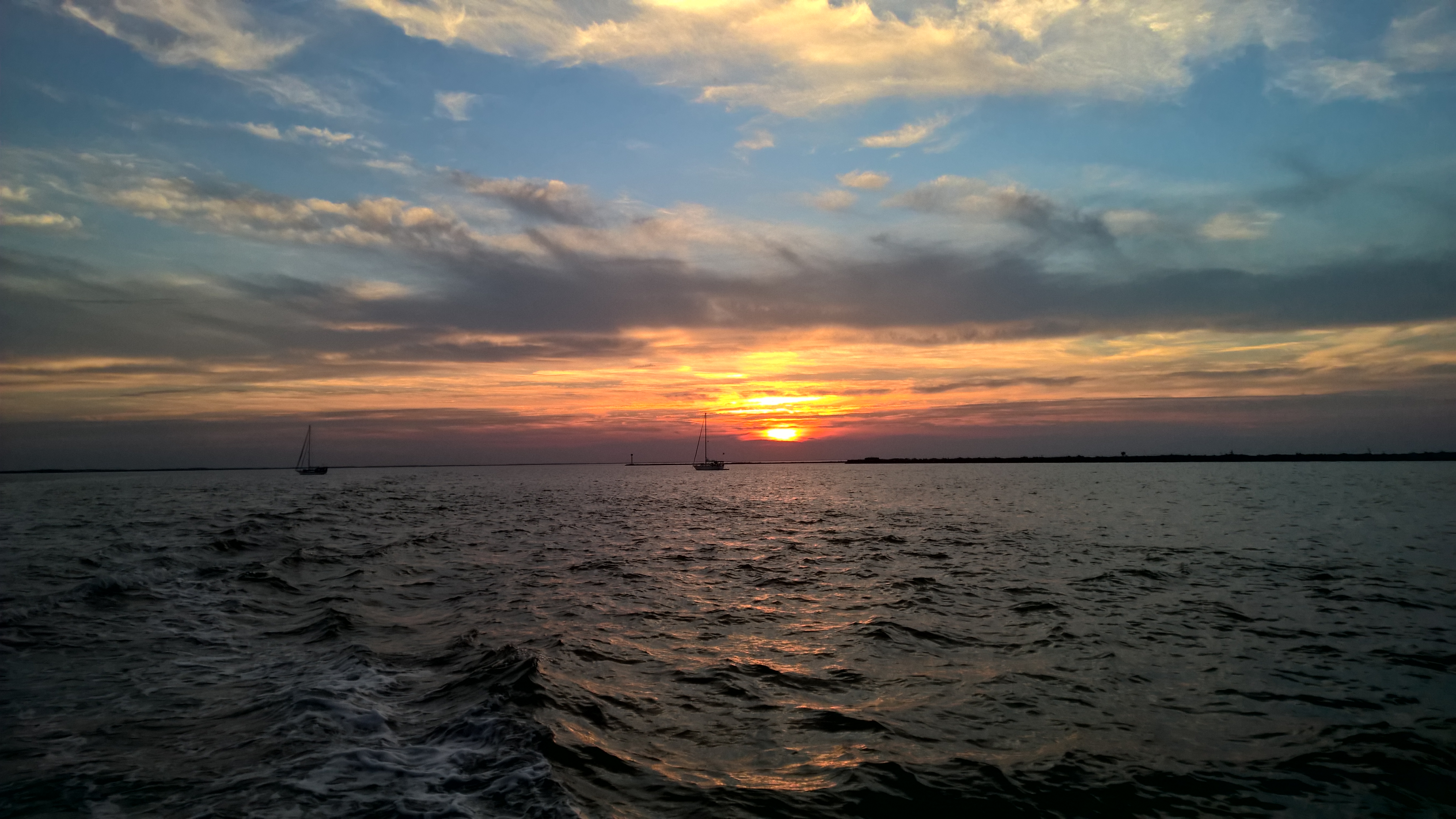 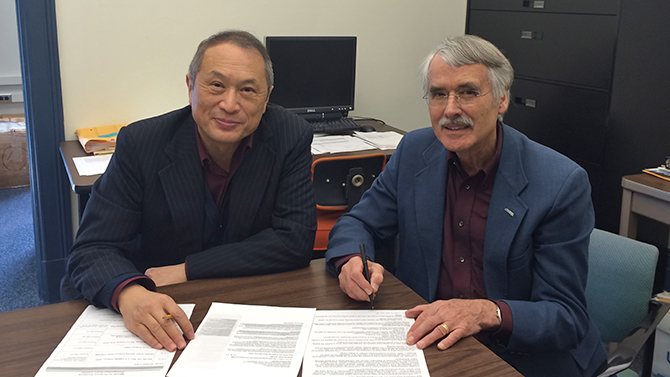 UD’s Xiao-Hai Yan with co-author Kevin Trenberth from the National Center for Atmospheric Research, who visited the University earlier this fall.

Article by Karen B. Roberts Photos by Doug White and Enhui Liao November 22, 2016

A new multi-institutional study of the so-called global warming “hiatus” phenomenon — the possible temporary slowdown of the global mean surface temperature (GMST) trend said to have occurred from 1998 to 2013 — concludes the hiatus simply represents a redistribution of energy within the Earth system, which includes the land, atmosphere and the ocean.

In a paper published today in Earth’s Future, a journal of the American Geophysical Union, lead author Xiao-Hai Yan of the University of Delaware, along with leading scientists from the National Oceanic and Atmospheric Administration (NOAA), National Center for Atmospheric Research (NCAR), National Aeronautics and Space Administration (NASA), Scripps Institution of Oceanography, and University of Washington, discuss new understandings of the global warming “hiatus” phenomenon.

In particular, the researchers point to the prominent role played by the global ocean in absorbing the extra heat from the atmosphere by acting as a “heat sink” as an explanation for the observed decrease in GMST, which is considered a key indicator of climate change.

“The hiatus period gives scientists an opportunity to understand uncertainties in how climate systems are measured, as well as to fill in the gap in what scientists know,” explained Yan, Mary A.S. Lighthipe Chaired Professor in the College of Earth, Ocean, and Environment and director of UD’s Center for Remote Sensing.

“Individually, each of us carries some research into this topic and many of my co-authors are leading scientists who have studied this topic from various and often diverse angles.”

“The hiatus in the rise of global surface temperature is over, but understanding the processes involved helps us with future predictions,” continued co-author Kevin Trenberth of National Center for Atmospheric Research (NCAR).

The paper grew out of a special US CLIVAR panel session at the 2015 AGU fall meeting and includes the following distinguished co-authors:

• Ka-Kit Tung, University of Washington; and

Where is the missing heat?

While Yan said it is difficult to reach complete consensus on such a complex topic, after a thorough review of the literature and much discussion and debate, there are a number of key points on which these leading scientists concur:

• From 1998 to 2013, the rate of global mean surface warming, which some call the “global warming hiatus,” slowed.

• Improved understanding of how the ocean distributes and redistributes heat will help the scientific community better monitor the Earth’s energy budget.

Earth’s energy budget is a complex calculation of how much solar energy enters our climate system from the sun and what happens to it: how much is stored by land, in the ocean or in the atmosphere.

“To better monitor the Earth’s energy budget, and its consequences, the ocean is most important to consider because the amount of heat it can store is extremely large when compared to the land or atmospheric capacity,” said Yan.

According to the paper, arguably, the most appropriate single variable in the Earth’s system that can be used to monitor global warming is ocean heat content integrated from the surface to different layers and to the bottom of the ocean.

In the near term, the scientists hope this paper will lay the foundation for future research in the global change field. To begin, they suggest the climate community replace the term “global warming hiatus” with “global surface warming slowdown” to eliminate confusion.

“This terminology more accurately describes the pause in the increase of the ocean’s global mean surface temperature in the late 20th century,” Yan said.

The scientists also called for continued support of current and future technologies for ocean monitoring as a means to reduce observation errors in sea surface temperature and ocean heat content.

This includes maintaining Argo, the main system for monitoring ocean heat content, and the development of Deep Argo to monitor the lower half of the ocean; the use of ship-based subsurface ocean temperature monitoring programs; advancements in the use of robotic technologies such as autonomous underwater vehicles to monitor marginal seas and shelf and coastal regions; and further development of real- or near-real-time deep ocean remote sensing methods.

Yan’s research group reported in a 2015 paper that some coastal oceans’ (e.g. U.S. East Coast, China Coast) response to the recent global surface warming slowdown are three times larger than what is found in the open ocean.

“Although these regions represent only a fraction of the ocean volume, the changing rate of ocean heat content is faster here and real time data and more research are needed to quantify and understand what is happening,” Yan said.

Variability and heat sequestration over specific regions (i.e. Pacific, Atlantic, Indian, Southern Oceans, etc.) was also discussed and requires further investigation. However, there is broad agreement among the scientists and in the literature that the slowdown of GMST increase from 1998-2013 was the “result of increase uptake of heat energy by the global ocean during those years.”

This work was supported through various funding sources including the National Science Foundation, NASA, NOAA and NASA-JPL.