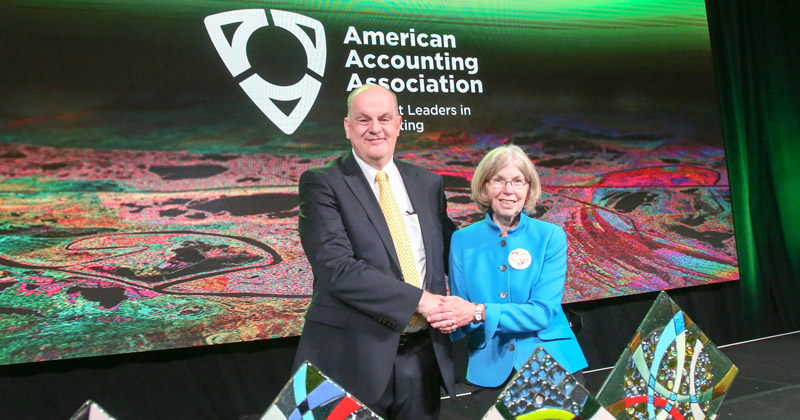 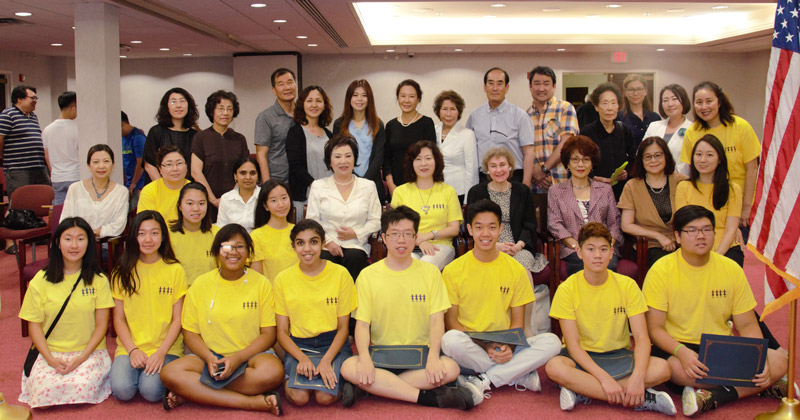 Margaret Stetz, fourth from the right in the second row, delivered the keynote address at a ceremony arranged by the Washington Coalition for Comfort Women Issues Inc. She is seated between the organzation's current president, Jungsil Lee, and its past president, Christine Choi. See PRESENTATIONS. 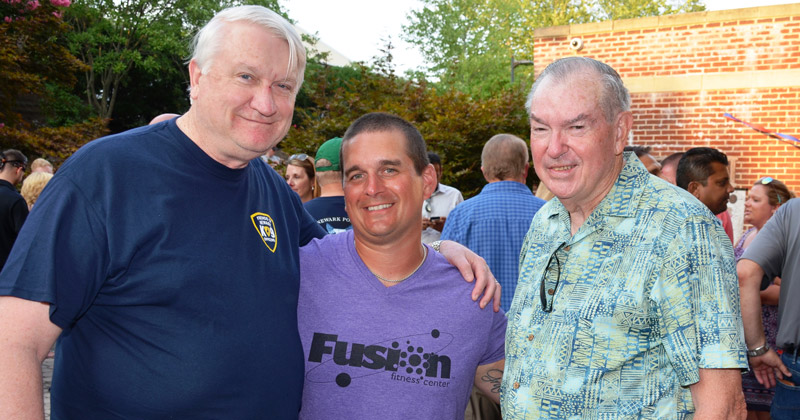 Co-chairs of the "Battle of the Bars for Newark Area Nonprofits" are (from left) event co-chairs Bill Sullivan and Nic DeCaire, with former Newark Mayor Vance Funk. See COMMUNITY SUPPORT. Prasad Dhurjati has been invited to be an overseas fellow of the Royal Society of Medicine, established in England in 1805.

Prasad Dhurjati, professor of chemical and biomolecular engineering with joint appointments in mathematical sciences and biological sciences, has accepted an invitation to be an overseas fellow of the Royal Society of Medicine. Dhurjati’s collaborative work with biologists in computer modeling has provided much insight into medical research including brain cancer, osteoporosis, autism and the human gut microbiome. He joined the UD faculty in 1982. The Royal Society of Medicine was established in England in 1805. Among its honorary members are Charles Darwin, Louis Pasteur and Sigmund Freud.

The American Accounting Association (AAA) has named Guido Geerts, Lerner College professor of accounting and EY Faculty Scholar, as a recipient of the 2018 AAA Outstanding Service Award in honor of his dedicated service to the education and practice of accounting. This prestigious award recognizes outstanding services to the AAA and is intended only for rare events or milestones achieved. Geerts received his award Aug. 7 at the AAA annual meeting in Washington, D.C.

Kamila Migdal, a doctoral student in applied physiology, has been named a 2018 Graduate Student Ambassador (GSA) by the American Physiological Society (APS). The GSA Program provides an opportunity for graduate student ASP members to serve as liaisons to promote physiology and the APS within their local universities. The 2018 class joins the 2017 GSAs to build leadership and outreach skills, promote physiology and increase awareness of the benefits of APS membership. This program enrolls up to five APS graduate students each year who have passed their qualifying exams to serve a two-year GSA term. Ambassadors are selected based on their leadership skills, willingness to establish collaborations with local institutions, availability on social media platforms, presentation/lecture experience, mentoring experience and letters of recommendation. Each fellow receives web-based training to enhance his or her knowledge of physiology, leadership and presentation skills, APS programs and membership benefits, and also receives $1,200 in travel funds to attend the annual GSA training and present research at Experimental Biology during the two-year GSA term.

Theodore J. Davis Jr., professor in the Department of Political Science and International Relations, recently presented a paper at the University of Botswana in Gaborone, Botswana. The paper was titled, “Political Attitudes and Perceptions of Batswana: The Implications for Sustainable Human Development and Effective Governance.” Botswana stands out in human development and good governance among the other nations in Sub-Saharan Africa. Davis research asks what was it about attitudes and perceptions of the people of Botswana that contributed to the nation’s development status. He found that Batswana were very optimistic about the economic future of their country, and they have a high level of trust in their government and leaders. This optimism was the case even though Batswana were very pessimistic about their personal economic future and outcomes.

Margaret D. Stetz, Mae and Robert Carter Professor of Women's Studies and professor of humanities, was invited to deliver the keynote address at a ceremony on Aug. 11, 2018, arranged by the Washington Coalition for Comfort Women Issues Inc. (WCCW), a nonprofit human rights organization dedicated to supporting survivors of the Japanese Imperial Army's system of military sexual slavery and to educating the public about this WWII-era war crime. The ceremony, which was held at the Korea Innovation Center in Vienna, Virginia, honored high school students from the Washington, D.C., area who served as 2018 summer interns with the WCCW and worked on community-based projects to further education and advance social justice. On Dec. 16, 2017, on the occasion of the 25th anniversary of the founding of the WCCW, Stetz was presented with an award by the WCCW  "In Special Recognition" of her "academic contribution and efforts aimed at defending human rights, preventing human trafficking and crimes against women and increasing public awareness of women's rights."

Ann C. Mulé, associate director of UD’s John L. Weinberg Center for Corporate Governance, is the author of “SOX’s Financial-Expert Requirement 15 Years Later,” which was recently published in the Annual Report 2018 edition of Directors and Boards magazine. The article examines a requirement of the 2002 Sarbanes-Oxley Act requiring corporations to disclose whether their board of directors’ audit committee has at least one member who is an audit committee financial expert. Mulé’s research found that many companies are missing an opportunity to make this disclosure more transparent and helpful to investors. Isai Jess Muñoz, assistant professor of voice and opera in the Department of Music, led a four-day recording project, funded by a General University Research Grant, to document underrepresented song literature by Catalan composers of the 20th and 21st centuries. In collaboration with Russian-Israeli pianist Oksana Glouchko and Grammy Award-winning producer/engineer Andreas Meyer, Muñoz recorded an album featuring 24 songs. The recording was made from Aug. 10-13 in Gore Recital Hall of UD’s Roselle Center for the Arts.

The Courtyard by Marriott at the University of Delaware on the Laird Campus was host to the sixth annual “Battle of the Bars for Newark Area Nonprofits” on Friday, Aug. 10. The event, which brought together prominent community leaders and supporters of eight participating local restaurants, raised more than $16,000 for local nonprofit agencies. Each participating restaurant selected a nonprofit agency to benefit from the event as they competed against one another to generate the most tips and drink sales in a battle for bragging rights and the “Paco Cup,” named in memory of Newark’s first K-9 officer. This year’s winner was Timothy’s of Newark. Co-chairs of the event were Nic DeCaire of Fusion Fitness and Bill Sullivan, managing director of the Courtyard by Marriott and adjunct faculty member in the Lerner College’s Department of Hospitality Business Management, with Sullivan’s team from the hotel helping plan and execute the event.

The Delaware Division of the Arts has awarded $100,000 to UD to support three projects: The Resident Ensemble Players professional theatre company, whose 10th anniversary season opens Sept. 13 ($70,000); the 2018-19 Master Players Concert Series, which brings world-class musicians to perform on campus and in the community and opens its season Oct. 7 ($20,000); and the 2019 Musical Theatre Camp summer production for children and teenagers ($10,000). The grants, announced this month, are part of nearly $3 million the division has awarded to more than 100 arts and community organizations. The division is funded by the state General Assembly and the National Endowment for the Arts.