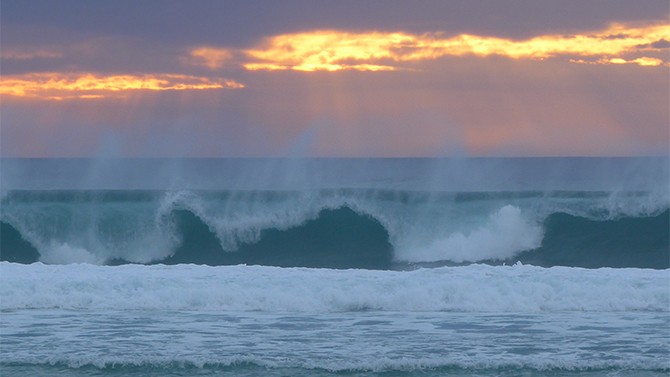 Breakers send droplets into the atmosphere. 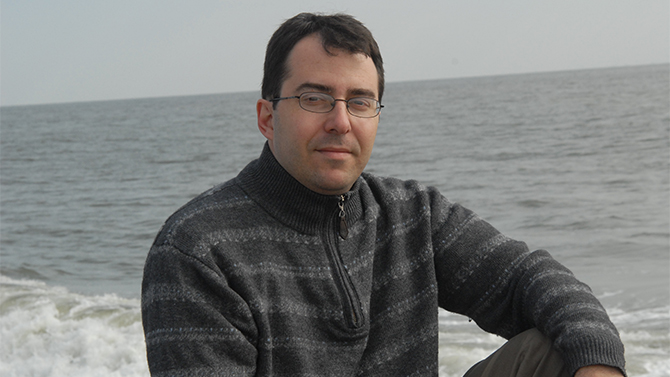 UD's Fabrice Veron studies ocean spray and its affect on weather and climate.

Breakers and the atmosphere

Article by Karen B. Roberts Photos by Luc Mieussens and Steven Billups November 07, 2016

Understanding weather and climate through droplets known as ocean spray

If you’ve ever been to the beach, it’s likely that you have observed the foamy whitecaps that form as waves break along the shore or out at sea.

For many, it’s a photo-worthy moment, but what most people don’t know is that the droplets contained in these whitecaps also serve an important role in our global weather and climate.

UDaily talked with the University of Delaware’s Fabrice Veron, professor in the School of Marine Science and Policy who studies how the ocean and the atmosphere are connected, about how ocean spray influences global climate. Veron and colleague David Richter, an assistant professor at University of Notre Dame, recently reported on the subject in an article in Physics Today.

Veron: Small spray droplets created from breaking waves in the ocean can be transported very high and far in the atmosphere. They evaporate leaving salt particles that help seed clouds and absorb or reflect sunlight. About 50 percent of the particles in the air are salt crystals left from small drops that were created when bubbles in the ocean from breaking waves burst at the surface!

Larger spray droplets are torn off the surface of the water when the wind is sufficiently strong. These droplets generally stay relatively close to the surface and fall back into the ocean quickly, within seconds to minutes. But even during this short lifetime, these large drops can exchange heat, locally, with the atmosphere.

These large drops are believed to play a very important role in fueling tropical storms and hurricanes. Scientists need to know more about this if we want to improve our ability to predict storm intensity, which is important for storm and hurricane emergency preparedness.

Q: How do scientists study these water droplets?

Veron: Scientists measure the size distribution of these droplets and try to observe how they are formed. They describe the spray generally as either small or large droplets. It’s challenging work because it’s difficult to study these droplets in situ, so scientists also use laboratory work and numerical studies to try to evaluate how the drops interact with the environment.

Q: What are scientists still trying to learn?

Veron: What we don’t understand well is their influence on hurricanes. Experimental and numerical work is needed on large droplets.

Small drops are smaller than the size of a human hair. Large drops are larger than that and can reach diameters comparable with raindrops.

We also wonder what role the large drops might play in atmospheric chemistry, so biochemistry studies of sea spray are also important. Finally, researchers need to further explore how sea spray is generated regionally, and whether regional variability has potential impacts on global climate.

Q: How does ocean spray have a global influence?

Veron: We know, locally, that large spray affects the formation of hurricanes, and that, at the global level small spray droplets are involved in global heat balance in the atmosphere.

In terms of a changing global climate, spray is likely to be involved in feedback effects. Simply put, if atmospheric humidity patterns or wind patterns are forced to change due to global climate effects, how much ocean spray is generated and the amount of energy and water vapor that the drops exchange with the air also will be affected. In turn, these exchanges resulting directly from the spray can influence local weather and climate, creating a feedback loop that is complicated and difficult to predict.

Q: What is next in your research?

Veron: I am particularly interested in the large spray droplets. I plan to perform experiments at the UD’s air-sea interaction laboratory in the School of Marine Science and Policy to further explore how large spray droplets behave using a large tank capable of generating wind and waves with state-of-the-art computer control and repeatability.

With my colleague David Richter, I would like to evaluate not just the size and number (size distribution) of the large spray drops generated by a breaking wave under given wind speed conditions, but also to look at the speed and direction at which these drops are ejected to better understand the drop generation process.

This knowledge will help in more accurately predicting what the drops do once they become airborne, and also how much they can influence the temperature, humidity and even the wind speed inside a hurricane.