UD’s College of Earth, Ocean and Environment owns and operates a fleet of research vessels that serve not only university faculty, students and scientists, but also researchers from universities, government agencies and private industry across the country. Contact Director of Marine Operations Jon Swallow for detailed information about the fleet’s capabilities, availability and use. 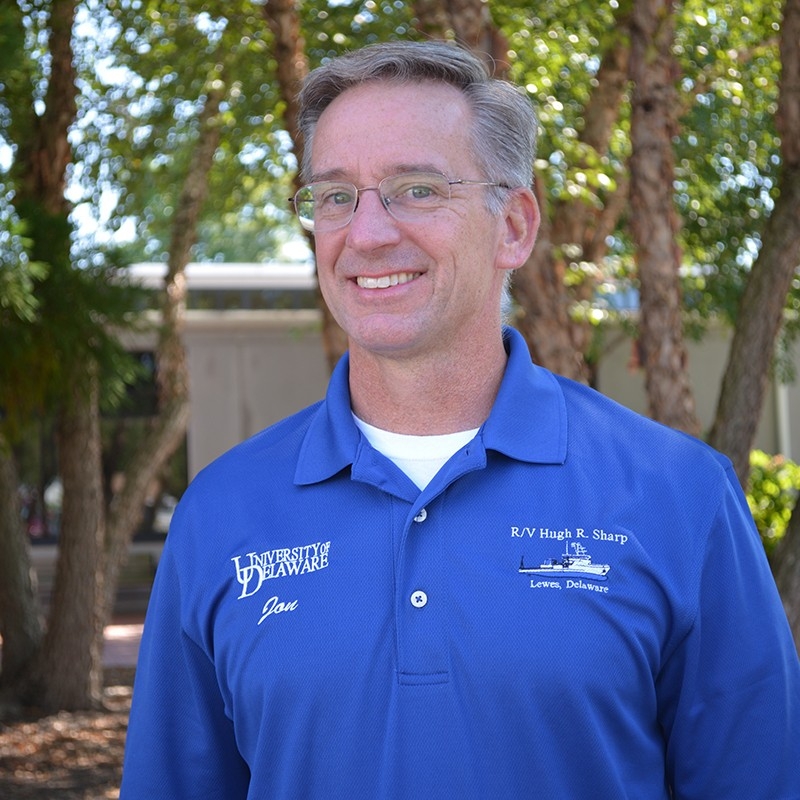 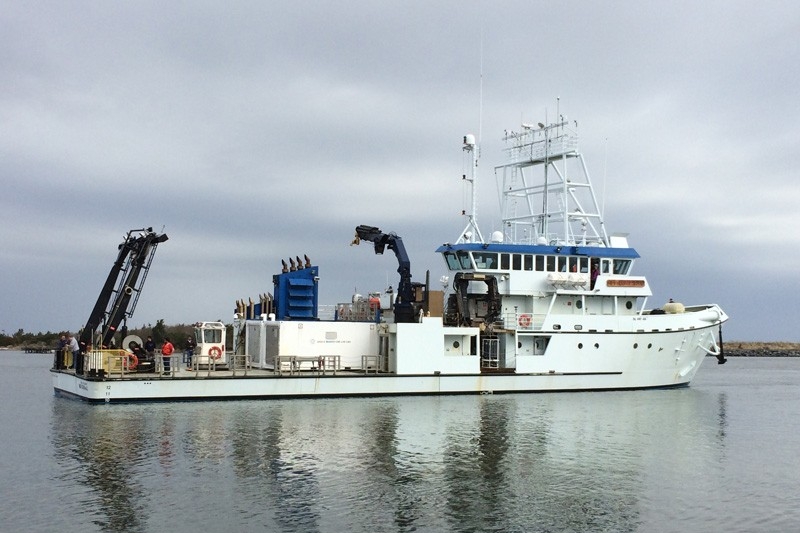 The R/V Hugh R. Sharp is a multi-purpose research vessel that operates as a member of the University-National Oceanographic Laboratory System (UNOLS) and U.S. Academic Research Fleet (ARF). The Sharp serves marine scientists as a state-of-the-art platform for exploring and sampling the coastal ocean.

The Sharp supports a wide range of marine disciplines including chemical, geological, physical, and biological sciences, as well as acoustics, fisheries, and marine mammal research. The vessel is a regional asset, serving researchers from federal science agencies and institutions throughout the Mid-Atlantic.

The R/V Sharp was built by Dakota Creek Industries in Anacortes, Wash., and commissioned into service in May 2006. The vessel is named in honor of the late Hugh R. Sharp, who served for many years on the University’s board of trustees and was a staunch supporter of marine research.

The R/V Sharp can carry 14 scientists and has a fuel endurance of approximately 14 days. It typically operates in the coastal waters from Long Island, N.Y., to Cape Hatteras, N.C., as well as Delaware Bay and Chesapeake Bay. Projects occasionally require the vessel to work as far north as the Gulf of Maine, as far south as Florida, and as far offshore as Bermuda.

Operational support for the Hugh R. Sharp is provided primarily by the National Science Foundation (NSF), the Office of Naval Research (ONR), and the National Oceanic and Atmospheric Administration (NOAA).

Medical Profile Form (PDF)
Please do not email this form. The PI will collect paper copies and provide them to the Captain before the ship sails.

Release of Liability Form (PDF)
To be filled out by non-UD or federal employees. It should be signed aboard the ship prior to sailing. 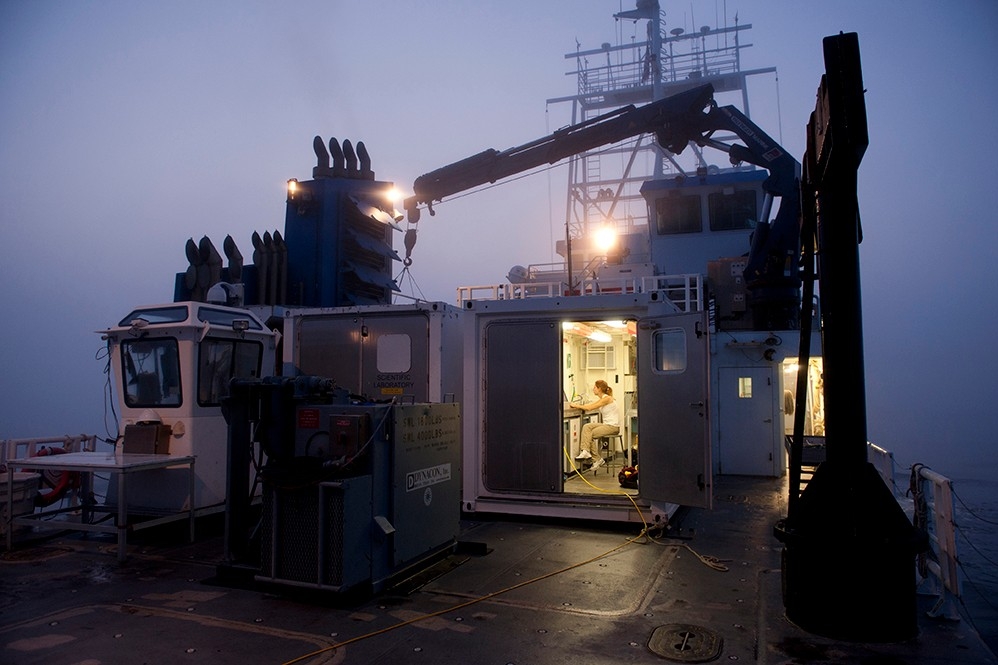 The Van Pool provides specialized portable laboratories for deployment on Academic Research Fleet Vessels.  Funding for operating these shared use facilities is provided by the National Science Foundation and daily usage charges.  More information on the types of laboratory vans available and for scheduling can be found on the web page below. 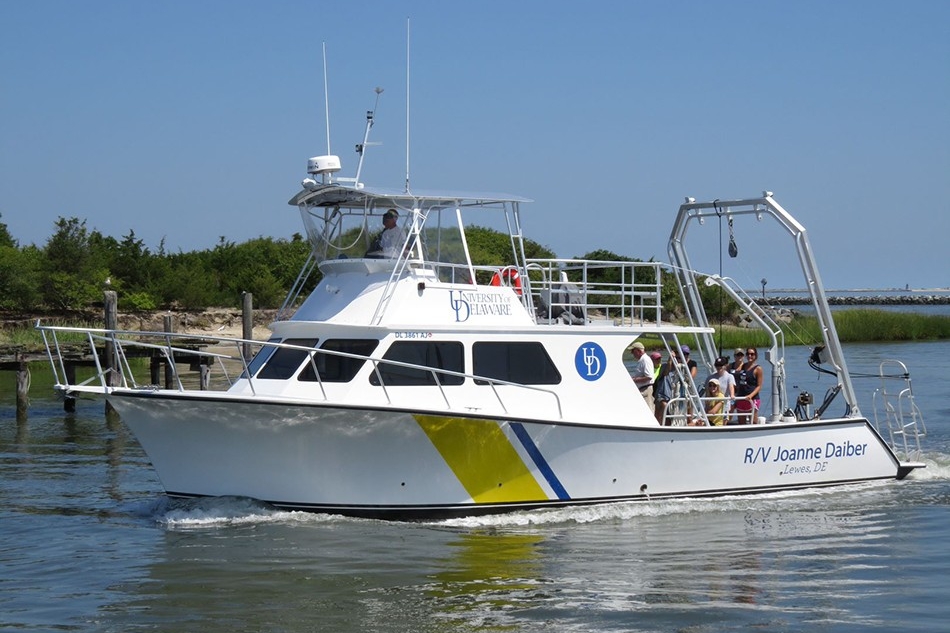 The R/V Joanne Daiber provides an outstanding experiential classroom for students engaged in coastal research as well as state-of-the-art capabilities for faculty research in the Delaware Bay and nearshore. It is a 46-foot research vessel designed to function in a range of habitats from the bay estuaries to the shelf break.

Delivered in June 2014, the R/V Joanne Daiber significantly enhances the University’s capacity to support scientific research, particularly with unmanned vehicles and other state of the art sensor technology.  The vessel also provides an outstanding work platform and experiential classroom for students engaged in coastal research.

The R/V Joanne Daiber is named in honor of the late Joanne Daiber, for the devotion she had for the University of Delaware Marine Program, and the professional sacrifices she made along the way. The vessel is used for coastal research as well as undergraduate and graduate instruction

Joanne Elizabeth Currier Daiber was born in Winchester, Massachusetts, in 1927. She received her bachelor of science degree in biology from Bates College in 1949 and completed a master’s degree in biology from Vassar College in 1951. That same year, she was hired by the University of Delaware as its first female marine biologist for the newly formed marine studies program. During her time on the faculty, Daiber performed research on the zooplankton species in the Delaware Bay and assisted the other researchers with their projects.

In 1953, she married fellow faculty member Franklin Daiber, who later went on to become the director of the marine laboratories and chairman of the University President’s Marine Science Coordinating Committee. Due to the policies of the time, married couples were not allowed to work together professionally and Joanne Daiber left the program. However, she continued to support the research occurring in the labs. As the program expanded into a graduate program and eventually its own separate college, she also assisted with graduate housing and editing her husband’s books.

In the 1970s, Joanne Daiber founded the Delaware Nature Society’s guide program. She helped develop educational programs for children from K-12 and their teachers at the Ashland Nature Center. In addition to all of this, she was a member of the Societte Littoral Hortense Horrand and was the acting president of piscatorial adventurers within that organization. She continued helping with her husband’s research as well, until his retirement in 1987.

In 2000, the memoir “Salty Memoirs: Adventures in Marine Science”, written by Franklin and Joanne Daiber, was published by the University of Delaware. That same year, the Joanne Currier Daiber Scholarship was created with the purpose of supporting female graduate students in marine sciences at the College of Marine Sciences at the University of Delaware.

While Joanne Daiber passed away on February 16, 2007, her memory continues at UD with the research vessel named in her honor. 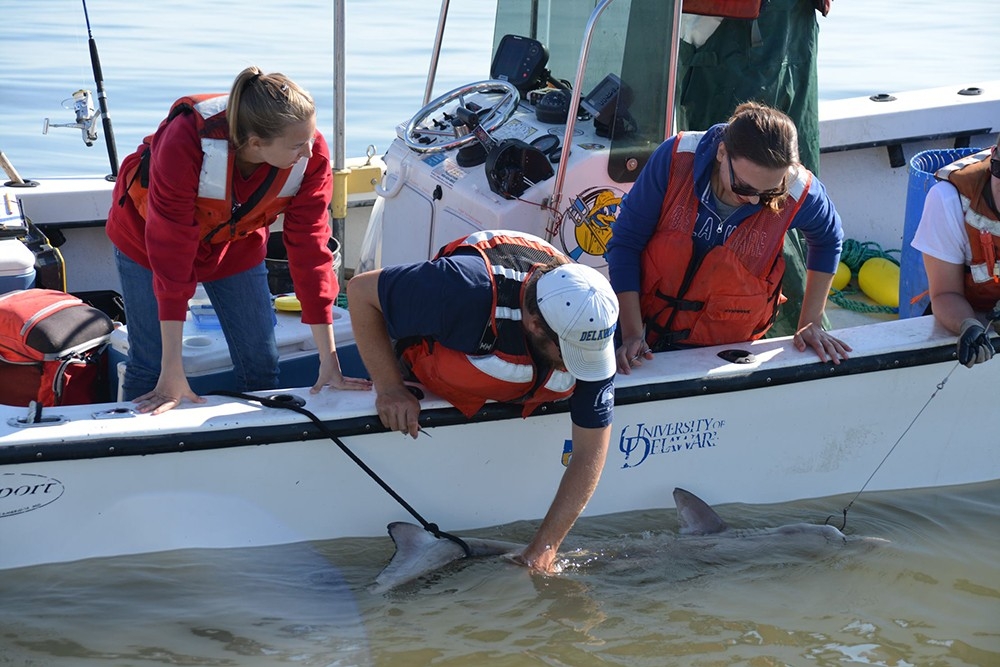 In addition to the R/V Joanne Daiber, the CEOE fleet includes three small outboard-driven boats. These are docked at the college’s harbor at the Hugh R. Sharp Campus in Lewes and are used for research trips into Delaware Bay and nearby coastal waters.  More information about the electronic, mechanical, hull, and performance specifications for each vessel are below: