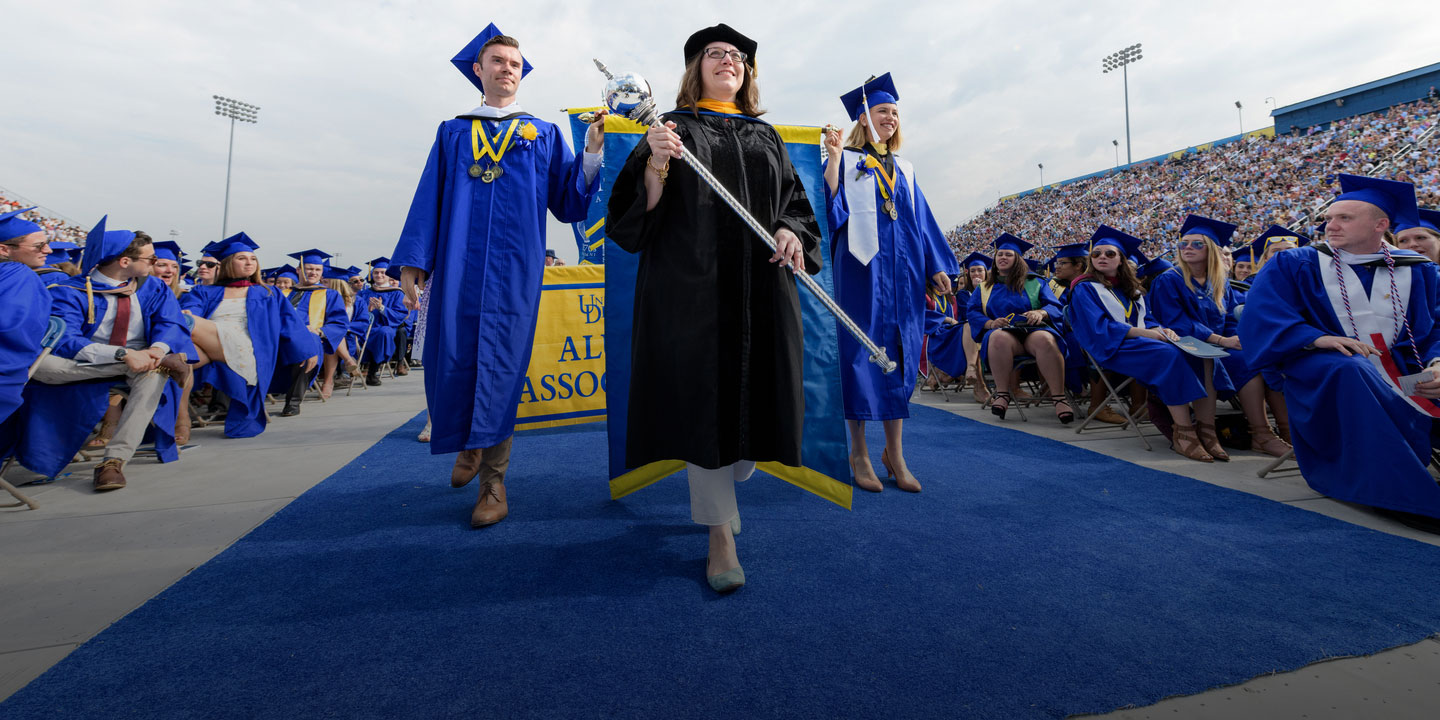 Mace and Chain
of Office

Originally a weapon of war, the mace later became a symbol of power and authority. In ceremonies, it signifies the dignity of an institution; as a weapon, the mace was used by a mounted knight to unseat opponents in battle and tournament by smashing his opponent’s armor. It was made either entirely of metal or had a metal head, and was often spiked. For a time during their history, maces were both functional and symbolic, both lethal and ceremonial, but gradually their warlike aspect diminished and it became entirely symbolic. Despite elaboration, the University of Delaware’s mace has features of early 14th-century maces: a squat head divided into a series of deep longitudinal flanges and topped with a short spike.

The University acquired its mace in 1971 during a resurgence of interest in this tradition on the part of American universities. The mace is borne before the President of the University by the University Marshall in academic processions. The wearing of the chain in conjunction with the mace indicates that the President temporarily embodies “the power, authority, autonomy, immunity, and sovereignty vested in the institution whose dignitas he represents.” Internally, it is a sign of authority; externally, it is a sign asserting immunity from undue secular and clerical interference. Above all, it is a manifestation of the “immortal dignity” of the university. The mace of the University of Delaware is forty-two inches long and weighs nine and-one-half pounds. The head of the mace is ten inches in diameter and displays eight diamond-shaped panels in basse-taille enamel on gold-plated silver alternating the Blue Hen and American Holly, the state bird and the state tree, respectively. The process of basse-taille enameling fuses transparent enamels over a background carved in low relief. The opaque enamel has a brilliant translucence. The head of the mace is surmounted by the incised inscription “Universitas Delawariensis” and surrounds the corporate seal of the University’s Board of Trustees made in gold-plated silver on champlevé enamel. The process of champlevé enameling fuses enamel onto the incised or hollowed areas of a metal base. The design to be enameled is cut out of the thickness of the metal ground and glass powder is placed in the resulting cavities. After firing, the enameled surface is smoothed level with the metal and polished. The seal of the University is at the base of a gold-plated crown which ends in a long gold-plated cone. The hammered sterling silver shaft is divided into two parts by a gold-plated handle, and ends in a gold-plated diamond shape.

The chain of office of the University of Delaware is forty-eight inches long and displays alternating panels of Blue Hens and gold-plated holly clusters on a diamond-shaped background. In the front hangs the medallion consisting of the seal of the University in blue champlevé enamel surrounded by a wreath of holly leaves and berries in gold-plated sterling silver repoussé, a method by which the design is raised in relief by hammering on the reverse side. The medallion is suspended from a spall diamond-shaped panel displaying the gold-plated number “1” to indicate that Delaware was the first state to ratify the United States Constitution. A large diamond shape at the back of the chain contains the coat of arms of the State of Delaware. The recurring diamond theme was used in the chain and the mace because Delaware is called the “Diamond State,” a designation which refers to Delaware’s worth in relation to its size. Dr. William S. Heckerscher, Director of the Duke University Museum of Art, wrote to President E. A. Trabant on July 6, 1970, to explain that he was planning an exhibition of American academic maces and wondered whether the University of Delaware had a ceremonial mace that it would be willing to lend for the exhibition. President Trabant instructed his Executive Assistant and University Secretary Daniel W. Wood to inform Dr. Heckscher that “the University of Delaware does not have a mace that would be at all appropriate for your exhibition of maces….we are, therefore, extremely interested in your exhibition and plan to come to Durham to see it.”

Since they are works of art, the mace and chain of office of the University of Delaware are part of the University’s permanent art collection. Indeed, the Lowe Art Museum of the University of Miami exhibited the mace in an exhibition titled “A History of Silver and Goldsmithing in America,” held November 20, 1975 through January 4, 1976. Florida International University was allowed to use the University of Delaware’s mace during its graduation ceremony on December 13, 1975. A letter of thanks said: “Our graduation went off splendidly last Saturday. I don’t know if the elegance of the mace and presidential chain had anything to do with it but there was more decorum than there usually is. I do know that using them has given considerable impetus toward our getting our own mace.”

The mace and chain were purchased with unrestricted gifts from the alumni of the University. When they are not being used in academic ceremonies they are displayed in a mahogany and glass case in the Office of the President.