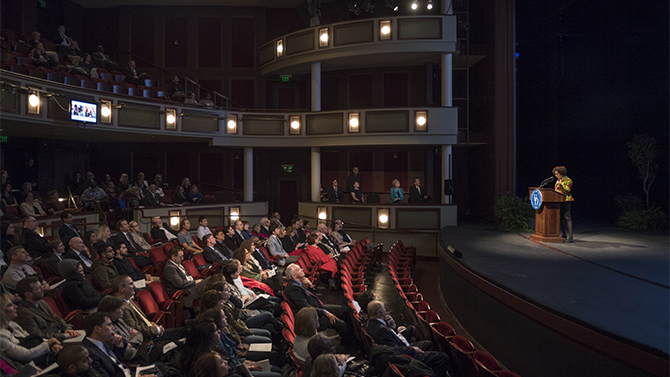 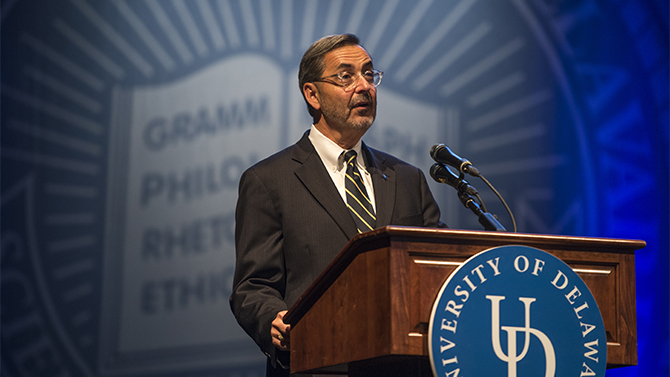 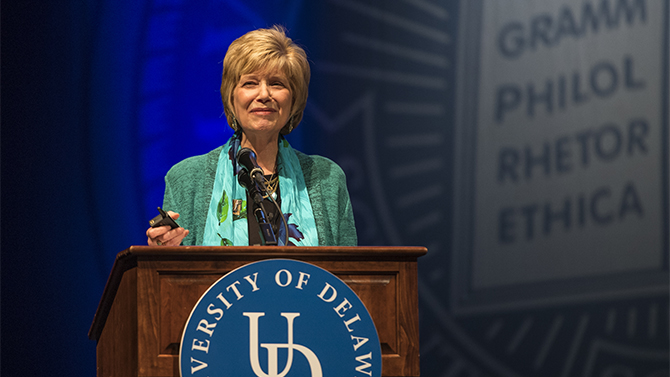 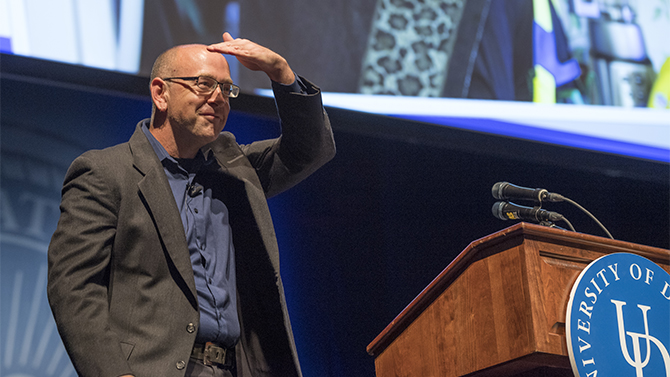 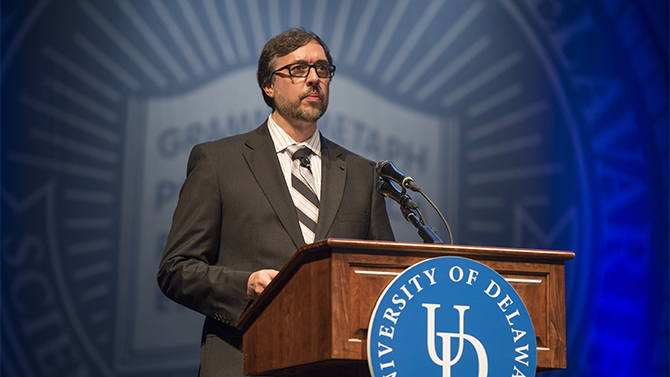 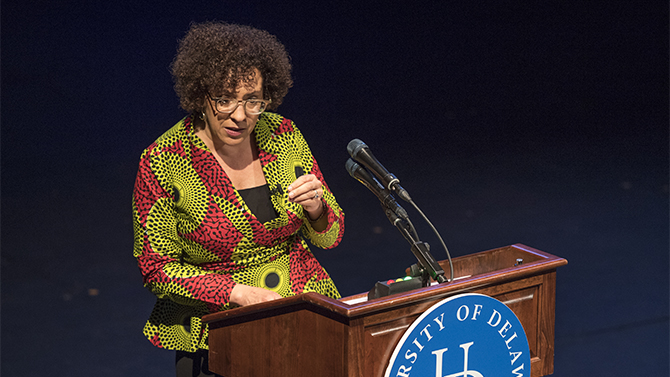 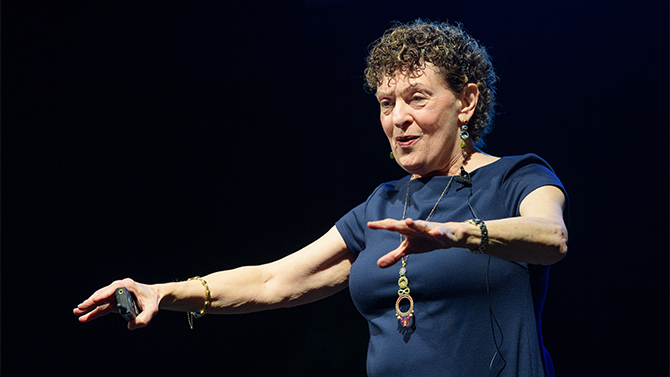 After a morning of regalia and pomp, as is traditional for a presidential inauguration – with special guests, family flown in from far-flung places, dignitaries from Delaware, the White House and especially Athens, Greece, to honor the University of Delaware's 28th president, Dennis Assanis and celebrate the greatness of the institution overall – the new president wanted to integrate programming featuring UD's exceptional faculty for the afternoon, too.

He got what he wanted.

And the University community, alumni and other guests got something extraordinary, too – a look at something rare indeed, not quite as rare as a gravitational wave, perhaps, but rare nonetheless.

Five of the University's world-class researchers, from different disciplines and bents of mind, converged Dec. 7 to share highlights of their work and the impact it is having around the world in a symposium called "Ideas That Dare To Change The World."

Those in similar fields might know that about each other. Others might attend an interdisciplinary lecture if they can get away from their own work. But there is great power in hearing from an assembly of widely divergent experts about the real-life impact of their research and the potential future gains for families, communities and nations.

Provost Domenico Grasso said he hopes a similar symposium will become an annual tradition at UD.

"As provost, I am extraordinarily proud of the dedication and commitment of all of our faculty," he said, "and that’s why I am thrilled at this opportunity for all of you to learn about just some of the many great projects happening at UD."

• Debra Hess Norris, the Unidel Henry Francis du Pont Chair in Fine Arts and chair of the Department of Art Conservation, has been described by the College Art Association as someone who has "perhaps done more than any single individual in the 21st century to further the cause of preservation of cultural heritage, both nationally and internationally.”

She stunned the Thompson Theatre audience with before-and-after slides of the work her students and collaborators have done to salvage photographs from fires, floods and other perilous conditions, restore objects to brilliance and piece together shattered treasures.

She talked about the friendships built during travels around the world – to the Middle East, Cuba, Africa, Asia, Europe – to learn and share methods with others, some of whom have no trained conservators in their region.

She showed poignant family photos, others' and her own, that help people understand their heritage and historic events. Photos, objects and notes also can provide great comfort in times of grief, she said, noting that they have done so for her and her family in recent days.

"This University is comprised of dedicated and talented individuals who care deeply about the personal success and personal well-being of others," she said. "This is the University of Delaware we are so proud of, that we believe in."

• Cole Galloway, a professor of physical therapy and father of GoBabyGo!, won't take "wait" for an answer as he fights for better ways to help infants with impairments get moving and help people recover from traumatic brain injury and other conditions that limit their access to ordinary life.

"You're going to find me in the mundane," he said, places like living rooms, synagogues, shopping centers. "Where the problems are is where the solutions are. We take laboratory-grade data and take it into the real world."

Galloway and his students and collaborators have built a global network that now includes 60 international GoBabyGo! chapters, 6,000 cars for babies to ride around in, and an ingenious harness system that puts people back on their feet.

"Is this research? Yes," he said. "Training? Yes. Advocacy? Yes. Service? Yes. The harnessed life, little by little, allows you to get more independent."

• Norman Wagner, the Unidel Robert L. Pigford Chaired Professor of Chemical and Biomolecular Engineering, sketched out the busy agenda of neutrons, particles that are smaller than atoms.

Wagner, inventor and director of the Center for Neutron Science, said he and others "engineer the tools of discovery," including a tool for neutron scattering that illuminates atoms and allows researchers to examine materials and their properties at that scale.

Wagner has developed materials using such information, including a shear-thickening fluid that acts like liquid armor on fabrics, making them less vulnerable to knives or projectiles.

The technology could be helpful in developing the space suits that could be used in the Mission to Mars, work that is under way at UD and with other collaborators.

Hundreds of college students around the nation along with community-based scholars and volunteers around the world now are helping to transcribe the minutes of the meetings, which describe the issues of the day and the brutal conditions and challenges that faced many African-Americans then, and now.

Foreman, who knew poverty as she grew up on the South Side of Chicago, read a list of the problems addressed in the Colored Conventions – voting rights, church burnings, lynchings, terrifying violence. Some could have been ripped from yesterday's headlines.

"And diversifying digital collections is critical work, too, when our country and academy are actively deciding who has claim in our classrooms and our country," she said. "This work matters to regular people. We hear from them all the time."

It takes a strong and committed university, such as the University of Delaware, to support such work, she said.

"It takes an innovative higher education community that is deeply structured and committed to the many of us who did not emerge from the over-privileged," she said.

• Roberta Michnick Golinkoff, Unidel H. Rodney Sharp Chair in the School of Education and director of the Child's Play Learning and Development Lab, explored the mysterious process of how babies learn language.

She gave examples of how they use a process of segmentation to start figuring out what words mean.

Golinkoff's lab brings researchers and babies into a collaborative partnership, where they can "get into babies' heads" without surgery or other intrusive means. Then they share what they are learning, with students and in much larger audiences through books and other media.

It was news Michael Miller could use. Miller is new to the University as associate director of development.

"Six months? I didn't know my daughter, Imani, was learning things like that," he said. "This was a great opportunity to get the academic overview and see the academic excellence the University has."

"It was wonderful and inspiring to hear about the work done by colleges across campus," said Meryl Gardner, associate professor of marketing in the Alfred Lerner College of Business and Economics.

Theoretical biologist John Jungck, who promotes interdisciplinary work throughout the University, was delighted by the strong social messages of the day.

"People think this is an ivory tower, so divorced from the issues of life," he said. "I am so proud of my colleagues. You find people and projects that really are making a difference in the world."

And the new boss, President Assanis?

"This was truly inspirational," he said. "I'm so proud – myself and my wife – with this event, which exemplifies the work of many other educators.

"I get even more passionate and even more proud of the University and the vision here for the future.

"The ability to share in this great joyous day was a real treat and high honor for me."