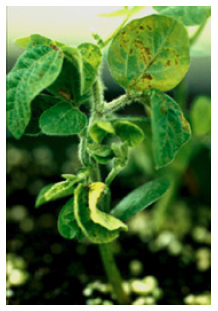 Soybean severe stunt virus (SSSV) is a putative neopvirus causing a soilborne disease of soybeans in Delaware first described in 1988. The disease, soybean severe stunt (SSS), may have been present in Delaware since 1964 as soybean plants exhibiting symptoms typical of SSSV were determined to be infected with the “bud-blight-strain” of tobacco ringspot nepovirus, based on symtomology alone. Severely stunted plants with thickened, dark-green leaves have been seen sporadically over many years in the Millsboro, DE vicinity, and in the vicinity of the Research and Education Center near  Georgetown. At present, the disease is known to occur in approximately 60 fields in Sussex county and nowhere else. The disease can be seen on susceptible cultivars soon after emergence on early-planted fields. The disease seldom occurs on soybeans planted after July 1.

Soybean plants become infected prior to emergence when roots are 1-2 inches long. . The internodes are shortened resulting in severe stunting and superficial dark brown lesions can often be seen on the stems. Stand reductions in both field and greenhouse studies have been associated with SSS. Severe stunting results in dramatic yield reductions due to stunting and reduced flowering and seed set. The disease can be lethal when highly susceptible cultivars are infected early.

In the field, the disease occurs in localized, circular to elliptical areas ranging from 10 ft across to several acres. The center of the areas often have no live soybean plants. Symptomatic plants are usually found at the margins of the dead patches. Late in the season the areas are often overgrown with weeds. 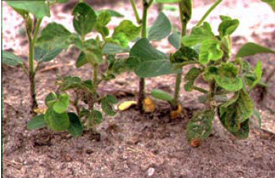 SSSV is the putative member of the nepovirus group. The virions are isometric particles 29-30 nm in diameter, but more labile than other nepoviruses and intact, infectious virions are difficult to purify and attempts to produce specific antiserum have failed. The virus is stabilized best by the addition of  bentonite or 2-mercaptoethanol to a 0.01 M sodium phosphate buffer, pH 7.0. Digestion studies with DNAse and RNAse measuring their effect on the infectivity of SSSV nucleic acid preparations indicate that the virus genome is most likely single stranded RNA. Results of double stranded RNA isolation and analysis has been inconclusive.

The thermal inactivation point of SSSV is between 50 and 65 degrees C. The dilution end-point is between 10-3 and 10-4, and longevity in vitro is 12 to 24 hours at room temperature.

SSSV is transmitted through soil, and dagger nematodes, Xiphinema americanum, are consistently associated with infected plants in the field. Greenhouse studies using field soils infested with dagger nematodes (10-20 per 250 cc soil) and planted with susceptible soybean cultivars consistently resulted in transmission of SSS and recovery of SSSV from symptomatic plants. SSSV is not believed to be seed transmitted. Plants grown from seed that was collected from infected plants have never shown any symptoms of SSS. Susceptible soybean plants can be mechanically infected by leaf or root inoculations.

Crop rotation and the use of resistant cultivars are the only viable control options at the present time. Rotations utilizing corn and/or sorghum have reduced levels of SSS experimentally.  Since symptoms are never seen in late-planted soybeans, planting soybeans double-cropped after wheat would avoid infection by SSSV. If the dagger nematode is the vector, reducing the nematode population by planting antagonistic crops such as rape or other green manure crops might be beneficial. These benefits have yet to be proved for this disease, although it has shown promise in other cropping systems.

Variety trials to evaluate resistance to the disease have been successful. Valuable cooperation from interested growers who let us use their infested fields and support from the Delaware Soybean Board has resulted in the identification of 14 resistant soybean cultivars over the years. Four cultivars, Delsoy 4710, Delsoy 5710, Choska, and Pioneer brand 9492 have resistance to the soybean cyst nematode (SCN) as well. Identified in 1998, Delsoy 5710 is resistant to SSS and all races of SCN. This variety is still in development and not widely available yet as is the case with Choska. A pilot breeding program has been initiated to try and incorporate resistance to SSS into high yielding varieties with SCN resistance for use in Delaware. The following table lists the varieties that may be currently available for planting in fields with SSS.