Adult– ¼ inch long, mouth part “snout” like, brown with a dark stripe down its back (fig. 1)

The alfalfa weevil (AW) overwinters in both the adult and egg stages. Although egg laying occurs in the fall and spring, larvae hatching from spring-laid eggs cause the most damage. Eggs are laid in the alfalfa stem any time temperatures are above 48 degrees F (fig. 3). Warm fall and winter temperatures can result in economic populations as early as late March. Alfalfa weevils generally have one generation per year. The weevil passes through four larval stages in approximately three weeks. When fully grown, the larvae spin a cocoon on the leaves of alfalfa plants or on the ground (fig. 4). A second generation of adult weevils emerges around mid-June, feeds for a few weeks, but it does not produce a second larval generation. 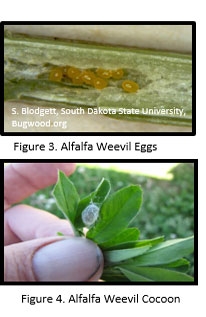 Larvae feed on the tips of plants and on leaves, resulting in a skeletonized plant (fig. 5). Severe damage causes the leaves to turn gray and appear "frosted". This insect is primarily a pest of the first cutting. However, if high populations were present just before the first cutting, regrowth of the second cutting may also be damaged. Adults can also feed, and in some cases they can cause economic loss. Larval damage results in reduced yield and quality of the first cutting. It may also result in season-long yield loss and reduce the life of the stand. If alfalfa is less than 12 inches tall when the weevil population peaks, fewer than 2 larvae per stem can defoliate a crop. In comparison, alfalfa greater than 18 inches tall can tolerate significantly higher populations. If fields are monitored routinely and sprayed only when economic levels are present, natural enemies may be able to suppress weevil populations below an economic level.

Begin sampling in late March and continue on a weekly basis until the first cutting. Fields should also be checked within one week of the first cutting for both larval and adult damage to the re-growth. During the first visit, examine 5-10 stems for damage and larvae. A full stem sample is not needed until damage or larvae are found on the plants. If leaf feeding is present, randomly collect 30 stems from throughout the field. Grasp stems at the base and place each stem upside down in a bucket. After collecting the stems, separate them into 3 or 4 bundles and beat them against the inside of the bucket to dislodge larvae from the stems. Count and record all larvae found per 30 stems. Measure 10 of the 30 stems and record the average stem height. Also, note if buds or flowers are present to determine the percentage of plants in the bud or flower stage.

The following thresholds can be used to make an alfalfa weevil control decision: 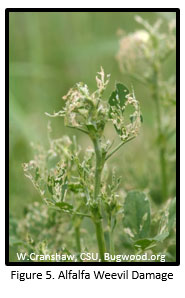 If alfalfa is in the full-bud stage and economic levels are present, early harvest is an alternative to spraying. If harvest is not possible within 3 days and populations are increasing, use a short residual insecticide. If economic levels of alfalfa weevil are present before harvest and you decide to cut instead of spray, be sure to check fields within one week of cutting for damage to the re-growth. If temperatures remain cool after cutting, there is often not enough “stubble heat” to control populations with early cutting. In some cases, damage to re-growth can be significant. A stubble treatment will be needed if you find 2 or more weevils per stem and the population levels remain steady.
Alfalfa - Chemical Control Options

NOTE – The label is the law. Be sure to read the label before making any pesticide applications and observe all label restrictions including days from last application to harvest – varies for forage, hay and grazing